ETH has hit a new all-time high, while Visa announces support for stablecoins in transaction settlement and PayPal adds support for crypto payments.

On April 4, the Bitcoin network underwent another difficulty adjustment, with an increase of 5.48%, reaching its highest ever difficulty at 23.14 T.

At the same time, as more machines are being deployed, the hashrate is increasing day after day. At this time, close to 166 EH/s is securing the Bitcoin network, near its highest point ever. 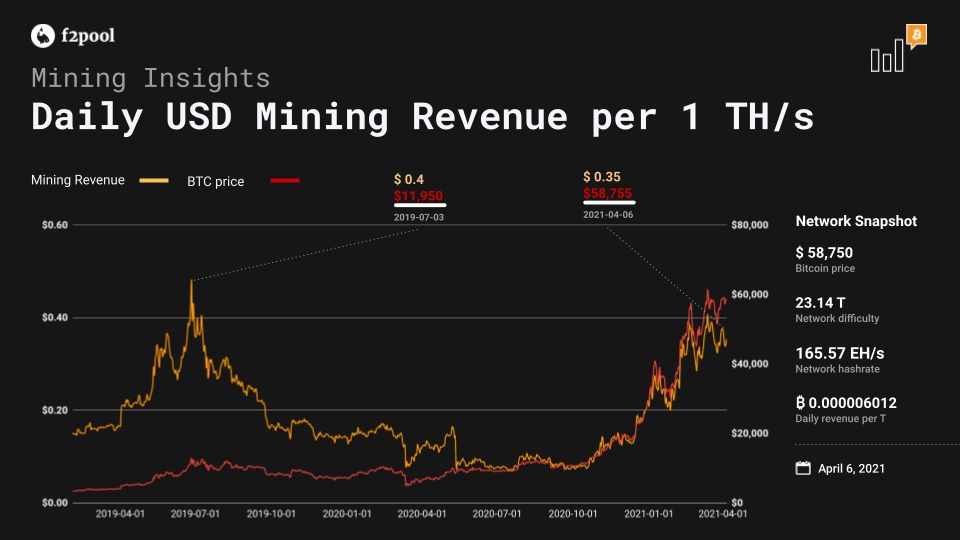 Ethereum hit its all-time highest price ever when it reached $2,097. This increase, combined with network hashrate not adjusting fast enough, has led to mining revenue increasing significantly to $0.15 per Mh/s. 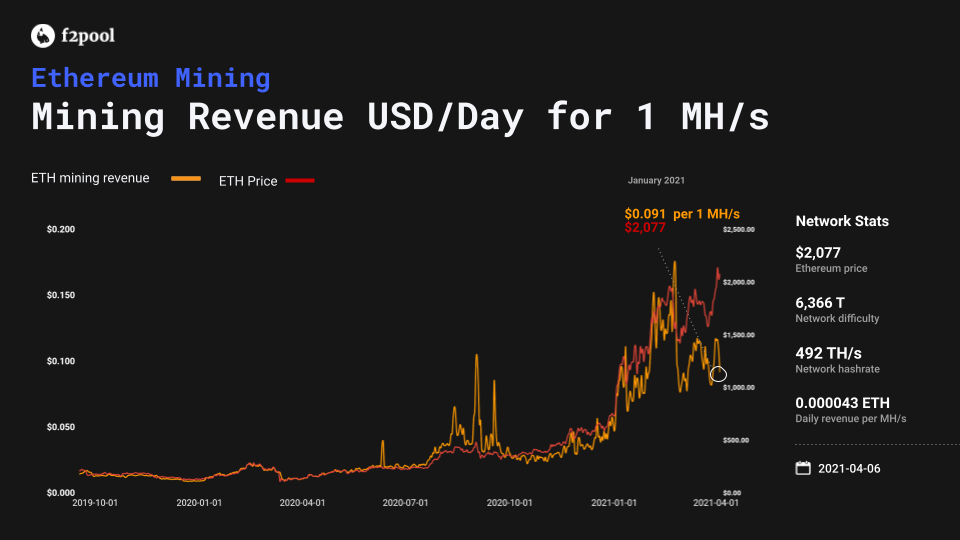 The code for Taproot could be ready for users to activate in the Bitcoin Core client via “Speedy Trial” in May of this year. If successful, Taproot will be activated in November.

New code in Bitcoin Improvement Proposal 8 (BIP8) will set the parameters for the Taproot activation, which will determine when to lock in the upgrade based on block height. Read more here.

BIPs #1080 updates BIP8 to make it compatible with the Speedy Trial proposal, which would allow miners to activate Taproot but would not begin enforcing its rules until roughly six months after the release of software implementing Speedy Trial.

A new proposed EIP, EIP-3416, aims to implement a transaction pricing mechanism with a fixed-per-block network fee and a median inclusion fee.

London is being prepared: EIP-1559 implementations are underway, and the scope of the upgrade is being kept tight to hit the July/August deadline.

The focus of Shanghai is still being discussed: either core developers will shift most of their attention to The Merge, or a last set of highly requested EIPs will be deployed as the merge gets prototyped.

Dogecoin developers released Operation Such Frensly, an implementation that aims to ease the user experience of the Dogecoin Core wallet.

There is now a highly secure, enterprise-grade, and full-featured Keccak node client for ETC.

Another upgrade for Decred mining is coming with dcrpool v1.2.0 RC2.

Tesla now not only supports Bitcoin payments, but is also operating Bitcoin nodes to support the infrastructure.  The BTCPay Server 1.0.7.1 release fixes several security vulnerabilities. It also includes a number of improvements and non-security bug fixes.

Visa has announced the use of USD Coin (USDC) to settle transactions with Visa over the Ethereum public blockchain.

Going forward, Visa plans to flesh out its crypto-native services by “supporting reconciliation and currency conversion for stablecoins such as USDC” and creating “settlement reports” with blockchain wallet addresses to verify transactions.

PayPal has launched Checkout with Crypto, a service that enables merchants to accept Litecoin. Litecoin can now be used for any payment settled through Paypal.

stFIRO (wrapped FIRO on Ethereum) has been approved for rewards for providing liquidity on SushiSwap.

The dogecoin.com website got a remodel by some community members, with a new and fresh design for newcomers to have everything in one convenient place.

Firo had its third community call on March 27. Discussion centered on Lelantus reactivation, the Electron wallet launch, and the Elysium tokenization layer.