More additions to the Flashbots product suite have arrived! Nvidia announced plans to limit their new GPUs hashrate. Bitcoin Pizza Day was celebrated all over the world.

The latest difficulty adjustment from May 13th, saw an increase of 21.53% – one of the largest adjustments recorded. 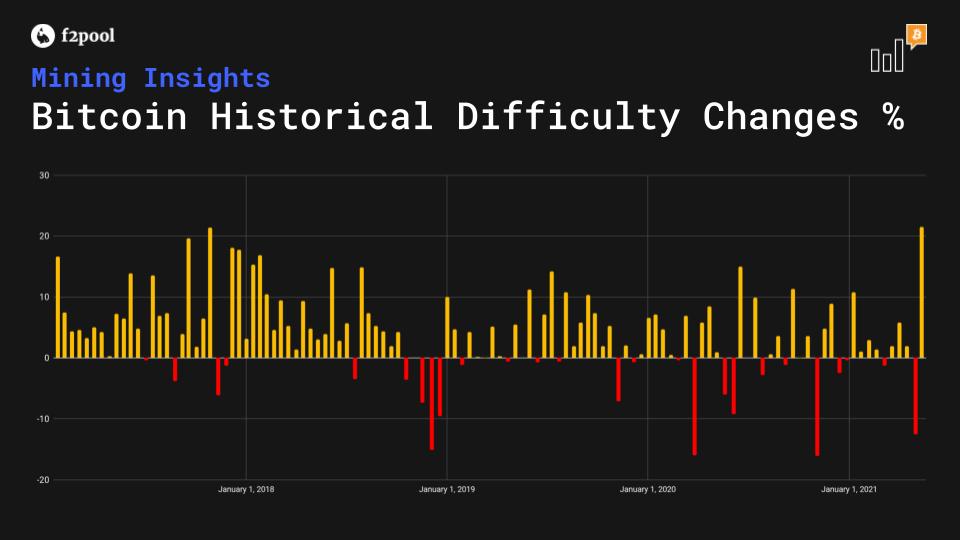 Flashbots has released v0.2 and along with it introduced bundle merging. Bundle merging is an additional way flashbots associated miners can be incentivized to earn more by mining multiple bundled transactions per block. The end results of these continued improvements and additions to the Flashbots product suite is that users don’t need to compete as much against bots and can get included more readily all while the system incentivizes all the stakeholders!

Nvidia has announced its plans to reduce the hashrate for its newly manufactured GeForce RTX 3080, 3070 and 3060 Ti graphics cards so they’re less desirable to miners.

The open source kawpowminer for Ravencoin has been updated to version 1.2.4. This update brings support for Nvidia 30XX GPUs.

Blockchain.com supports segwit: v4.49.1 of its wallet to add the ability to create a wallet with native segwit send and receive support.

ENS names with both forward and reverse resolution set are now displayed automatically on Etherscan. You can see it in the From and To columns and on the top right of each Address page! pic.twitter.com/IXMU4h8V1v

Coinbase introduced its wallet browser extension to the public with native mobile sync. Transactions can be initiated directly via desktop but also require user confirmation on their Wallet mobile app.

The last hardfork of Beam brought support for Confidential Assets. Beam Confidential Assets (CA) are similar to ERC20 tokens on the Ethereum network. CAs can be controlled by smart contracts which enables trustless distribution models, capped supplied CAs, and the ability to distribute via staking various assets.

Today, would you still buy a pizza with $BTC?

come check out https://t.co/p4gibQEMp0 for a nice surprise :)

and head over to @rarepizzas for some great initiatives! pic.twitter.com/ABhdmVDuSi

Dark Forest v0.6 game started last May 23rd! In Dark Forest v0.6, players will follow a spacefaring race known as the Seekers on an expedition through the multiverse.

Dark Forest v0.6 winners will be awarded prize planets of different rarities and enshrined in Valhalla.

HNS Fund announced the launch of the HNS Fund DAO with the start of the Fundraising and Ambassador teams.

Firo is looking for feedback on their upcoming grants program, incentivizing outside contributors to the project as privacy should be for everyone.