The latest network difficulty was adjusted by an increase of 7.31% to 15.56 T. During the last 2 weeks cycle, the average block time was 9 mins 19 secs.

As a result of price climbing and hashrate growth, the unit mining revenue sees no significant changes. Mining revenue has climbed back to similar values as at the beginning of May. 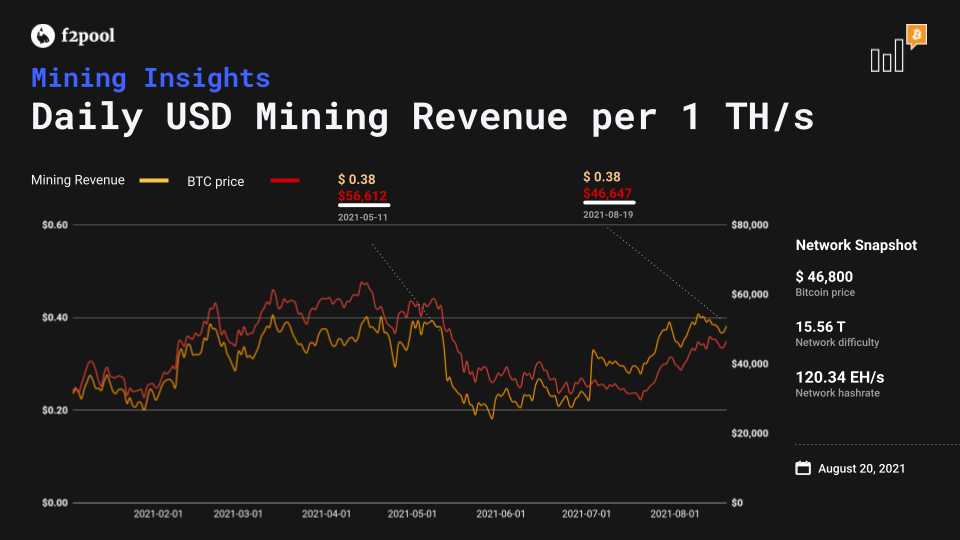 The ultrasound money is getting robust. Since the London upgrade was completed on the Ethereum network, more than 67,200 ETH fees have been burnt at a speed of 3.14 ETH/min by press time.

Since Ethereum’s price climbed, mining reward in fiat value remains the same, while income from the fee part measured in ETH was burned.

Solidity programming language releases its version 0.8.7 with support for the London upgrade, includes various improvements to Yul to EVM code transformation, the SMTChecker and some bugfixes. Read the announcement to get more information.

XMR <-> BTC atomic swaps are live on its mainnet. The process does not require a platform and can be performed directly peer-to-peer, ensuring trustless and private swaps.

XMR <-> BTC atomic swaps are live on mainnet! We're delighted to see Seth and others working to make them easily accessible such that anyone can swap trustlessly and privately! #monero #xmr https://t.co/uRm7UCCHox

The Litecoin MimbleWimble July recap update is out. The core dev has been focusing on rebasing changes from the LTC 0.18 branch to the LTC 0.21 branch. You can check the project’s roadmap on http://wenmweb.com/.

DigiByte devs have finished the majority of the upstream Bitcoin v22 merge into a new DigiByte v8.22.0 feature branch with passing tests.

Backup your wallet prior to updating for safety pic.twitter.com/go1xQx5Hgg

Bytom announces full transition to Proof of Stake consensus, thus ending its mining activity when block height 709, 660 is reached. The migration was completed on August 20, 2021.

News from El Salvador: Draft Bitcoin Banking regulation was released. That draft will serve as a guideline for banks and financial institutions on how to offer bitcoin-related services.

1inch deployed on Optimistic Ethereum, a layer 2 solution, to increase transaction speed and lower gas fees for their users. 1inch users can already start migrating assets to the Optimistic network through the Optimism Gateway.

📻 Tune in to a positive wave as the #1inch Network expands to Optimistic Ethereum (#OΞ) by @optimismPBC!

⚡️ Dive into the pink portal with us and get a tremendous increase in the speed of your transactions.

Horizen announced the partnership with Morpheus.Network. Through this partnership, they will integrate blockchain technology using Zendoo and provide ZK-based privacy for the supply chain.

Nervos announced adding Yokai, a DEX, to its ecosystem. Currently, it’s in the beta testing stage.

Bitcoin maxi Jack Dorsey is now maxing his Bitcoin—mining BTC through a remote hosting service for rigs. Here’s how it works. https://t.co/Kujhz0IwrW pic.twitter.com/3gtpe3pGlo