Even though it is a fall season right now, NFT summer heat still goes on. Jack revealed what the TBD platform really is, and more about new leaks on Bitcoin tipping on Twitter.

As a result of network difficulty rising, mining revenue reverted back to values similar to those at the beginning of August. It should be noted that it is the second biggest rise in difficulty this year, trailing behind May rising. 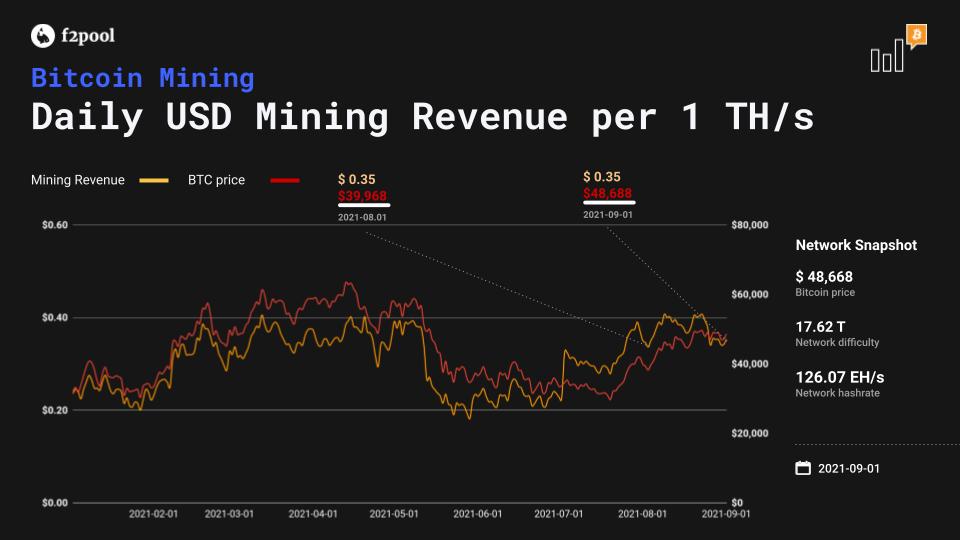 The number of coins burnt with EIP-1559 crossed 167,000 ETH by the 2nd of September. On August 27 and August 31, the network saw the two biggest amounts of gas fee burnt with each around 11000 ETH daily. The network also reached an all-time high of network difficulty at the 8440 T mark on the 31st of August.

As a result of price bouncing back and increase of on-chain activity, the monthly mining income of Ethereum rose by 83% based on the data on this chart.

Go Ethereum released a new version 1.10.8 for nodes to upgrade and to fix a critical bug. However, a chain split was reported afterward due to certain nodes running on the old version. If you are still running on the previous version, please get the nodes upgraded to fix the bugs.

Geth v1.10.8 is out, fixing a security vulnerability in all live versions of Geth. All Geth users need to update.

Further details will be provided at a later date to avoid attacks on #Ethereum and downstream projects.https://t.co/VQ398K0TA4

Arbitrum, layer 2 solution for ETH dApps scalability, is now live on mainnet. Now with the whitelist gone, everyone can test and use Arbitrum One. This article provides details on the current focus and future plans.

Ethereum Classic reminds every Core-geth node operator to upgrade to v1.12.1, which contains a critical security patch. Make sure to do so as soon as possible.

Beam 6.1 release is out, it marks an important milestone towards Beam’s Confidential DeFi platform. Check out here to get the release notes and to download them.

FiroPoW testnet is launched! FiroPoW’s algorithm changes every block making it difficult to build dedicated mining machines for it.

Twitter is working on adding Bitcoin as a way of tipping, according to a leaked image shared by Alessandro Paluzzi. A MacRumors post adds more information about Twitter “Tip Jar” features in beta versions, including Lightning network, custodial, non-custodial wallets, and more.

#Twitter is working on the ability to receive tips in #Bitcoin 👀 pic.twitter.com/uycD3qsR5F

Also, Jack Dorsey shared that the direction of TBD platform powered by Square has been determined. That new business is to build a DEX for bitcoin. In July, Jack tweeted about his new business focused on an open developer platform related to non-custodial permissionless and decentralized financial services.

The online payments giant PayPal announced that customers in the UK can now buy, hold and sell Litecoin

The online payments giant @PayPal announced today customers in the UK can now buy, hold and sell Litecoin! The move is in compliance with the U.K’s Financial Conduct Authority (FCA) so ENJOY! The #LitecoinFAM grows!! $LTC #Litecoin #Litecoin10 pic.twitter.com/I9gdDN6oXz

Dash announced a partnership with Horizen. This is the first time DCG has worked alongside another crypto team to build a shared platform.

Today we are thrilled to share the @horizenglobal and @Dashpay partnership!

This is the first time DCG worked alongside another crypto team to build a shared platform that will allow us to leverage the strength of our networks to increase our audience.https://t.co/uqRgN5hdhg

Hudson Jameson, the previous organizer of Ethereum’s ACD meetings, announced joining Flashbots. He is helping primarily in an operations capacity aiming at the scale and success of Flashbots.

I'm super excited to announce that today I am joining Flashbots! I'll be helping primarily in an operations capacity to help Flashbots scale and succeed as we journey through the exciting/scary future of MEV battles! 🧵 pic.twitter.com/ndEELnVDoU

1/ A diverse execution-layer client ecosystem is at the heart of all that we’re building together.

In dev call 18, topics such as Mystic Fork ECIP-1049 working with Core Geth and ETH/66 were discussed.

Hathor announced a community faucet for new users to try out the Hathor network. The intention is for it to be used once to experience the speed of Hathor and get some free Hathor to try out the network.

The Hathor Community Faucet 🚰
was developed through our Grant Progam by a member of our community.

Simply put in your #Hathor wallet address, receive some $HTR and
mint your own custom tokens!

Find out how to participate starting this Sept. 👇 https://t.co/O5yKO11Hz5

Digibyte had a pretty active month with dev updates, listings, and community updates. This article wraps up all the project activities.