The latest network difficulty was adjusted by an increase of 4.53% to 18.42T. During the last 2-week cycle, the average block time was 9 mins 35 secs. 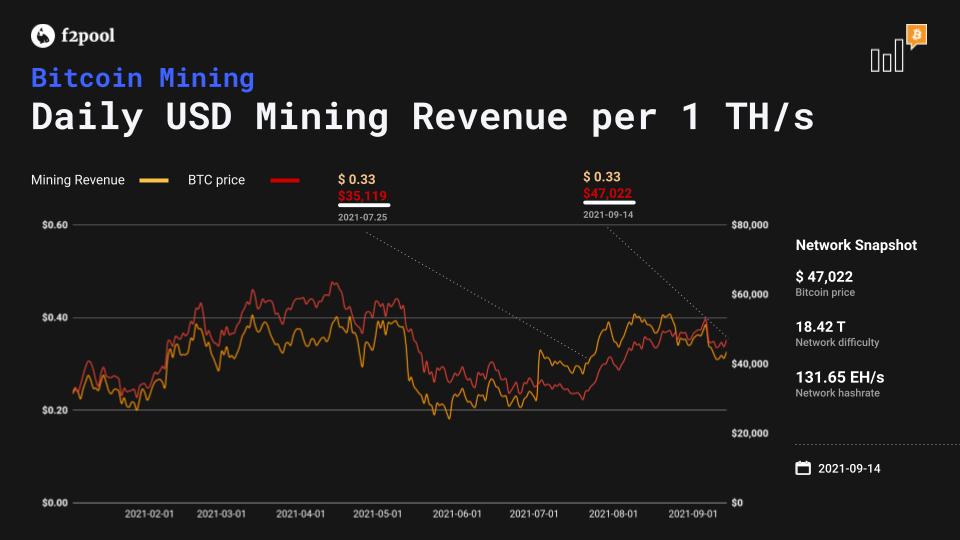 According to The Block, some of the largest North American Bitcoin mining companies have collectively mined over 10,500 BTC to date with nearly 40% of the output mined during the past 2 months. The total amount of Bitcoin that these companies held as of August, has quadrupled since December 31.

Greenidge, a Bitcoin mining company, and the NASDAQ-listed Support.com had arranged a merger, which resulted in Greenidge going public. More information can be found here.

Argo, the bitcoin mining company, secured yet another loan agreement from Galaxy Digital LP with the mining company’s Bitcoin as collateral. The loan will help Argo to further support its expansion efforts in Texas. More on this article.

The high demand on the network, and high priority fees associated with minting NFTs, means miner’s revenue was up as seen on the chart. Ever since the London hard fork, Ethereum mining stays lucrative and more miners are coming online.

Bitcoin Core v22.0 released. This is the first main update with Bitcoin core’s new naming convention on its release. Some notable changes include full hardware support in GUI, I2P and Taproot support. Check this article for more details.

Also, BIP-119 is getting more support among the BTC community. You can now track supporters through the signaling page here.

Optimism doubled the throughput limit on the mainnet. They reached the 200K transactions per day mark.

FYI: we just doubled the throughput limit on mainnet! We’re up to 200k transactions/day before we start throttling with higher gas prices. Stay frosty, stay optimistic!

Layer 2 scaling solutions designed to counteract network congestion on Ethereum are booming, with over $3.4 billion locked up in scaling protocols, according to layer 2 ecosystem tracker L2Beat.

Ethereum marked its first deflationary day on September 4, and had its first full day of negative issuance due to the EIP-1559 burn surpassing the newly issued coins. The overall net change for the registered day was -352.8717 ETH. Since then, the deflationary tokenomics has been upheld, and the same phenomena occurred on Sept 8 (-658.9628 ETH) and on Sept 9 (-727.3555 ETH).

Litecoin Foundation announced the release of OmniLite. OmniLite is a decentralized platform to create tokens and assets via the Litecoin blockchain.

Xaya currently provides the only SDK for building such game worlds like Taurion and SM Elite.https://t.co/9VIj54o7fm

Bitcoin adoption in Africa grows by 1200% in one year, Bitcoinmagazine reports. Growth is stimulated mostly by retail investors who prefer Bitcoin for savings, payments, transfers, and peer-to-peer trading.

Christie’s auction house announced the sale of Art Blocks Curated: Sets 1-3. Bidding for this lot will be conducted live in ETH.

We're proud to announce the sale of Art Blocks Curated: Sets 1-3, as part of the Post-War to Present auction in New York on 1 October. Bidding for this lot will be conducted live in ETH—a first for any leading auction house. #NFTs #digitalart #onlineauction @artblocks_io pic.twitter.com/jDNK6VviYi

Digibyte released the Android wallet v3.0.3.8 for open testing. To download and participate in testing yourself, get the wallet through this link. The iOS version of the wallet v2.0.2 is available for testing in TestFlight here.

Ycash released the iOS version of their wallet, YWallet, to open beta. Ycash Foundation encourages its community to test the wallet and report any bugs and errors.

Gitcoin Grants Round 11 kicked off on September 8. As of now, there are more than 67300 contributions from over 4000 people which amassed to 408,996USD with 969 grants contributed towards.

💰 - turn your crypto into a 'vote' and fund a grant today at https://t.co/EuP1mCwq9H pic.twitter.com/OCgQpuuFMa

ETHOnline is going to happen from September 17 to October 15. It’s hosted by ETHGlobal as one of the biggest events in the Ethereum community. It consists of a global hackathon and summit series. Now you can browse the agenda and set reminders about the YouTube live streams here.

If you thought HackMoney was big...

What if we told you we were going bigger? 🤑

Don't miss #ETHOnline--our biggest event of the year! Hack for over $150k in prizes (and counting), and celebrate an incredible year of growth in our ecosystem. 🥳

Nervos presents an August community update. The report includes news on the Yokai partnership, upcoming Hackathon, and other related news.

Conflux presents an August report, wrapping up all the news and changes that happened last month. The report includes news on the latest hackathon and new listings.