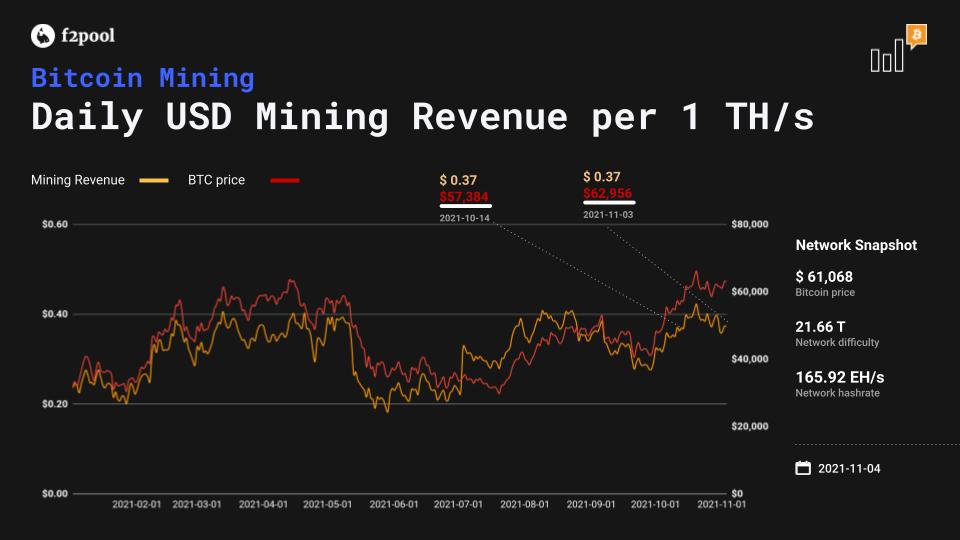 The 8th consecutive positive difficulty increase just came to Bitcoin on November 1, 2021, at a rate of 7.85%.

With increasing hashrate competition and some price fluctuations, the unit mining revenue is back to $0.37 where it was 20 days ago when the price was $57,384.

The Ethereum network has continued its growth towards new ATHs, with the network difficulty hitting 10,488 T on November 3.

The number of Ethereum tokens burnt in the past 7 days has also reached a new high at just over 100,000 ETH at the beginning of November. The total burn token has surpassed 762,000 ETH with a rate of 5.8 ETH per minute at the time of writing.

Taproot is approaching its activation on Bitcoin block height 709632, which is estimated to be in mid-November. Five months ago, the Taproot protocol was locked in after miners’ completed signaling their support for the upgrade.

Show your love for Taproot with our eye mask avatar at taproot.fish. You can view our countdown clock here and a detailed Taproot preparation list here.

Here is a brief explanation about what Taproot will bring, by Bitcoin developer Pieter Wuille.

An upgrade to the Bitcoin protocol which allows supporting wallets to construct a new address type, which can be used for everything from normal payments to advanced usage like Lightning. In many cases, spending is possible without revealing which of these was actually used.

Bitcoin Core 0.20.2 (backports) was released
It is available from https://t.co/ea0sMBjrp2
Release mail: https://t.co/KahVJFcZ9d

A number of topics were discussed at the latest Core Dev Meeting #125, including the Merge, the Arrow Glacier upgrade, and more.

As for the timeline of the Merge and difficulty bomb, Tim Beiko explained in his recently released AllCoreDevs Update 007.

ETC Cooperative announced they will soon be switching their ETC mainnet endpoint to use Rivet servers for improved uptime and service guarantees.

Dogecoin devs are now preparing the release of v1.14.5. You can view a list of open items about it here.

ENS is decentralizing governance and calling for DAO delegates. Its governance will be passed over to the community via the creation of a DAO and the $ENS governance token.

ENS is decentralizing governance & is now accepting applications for DAO delegates.$ENS governance tokens will be opened for claiming by ENS users (snapshot made yesterday) a week from today, with more details about it then.

Optimism introduced EVM Equivalence – suggesting that complete alignment with the Ethereum Virtual Machine specification will become the next universal standard across the L2 space. It will be coming to the Optimistic Ethereum network on November 11 with the release of OVM 2.0.

📣 Reminder: EVM Equivalence is coming to OE in just *9* days!

What it means and why it matters 👇https://t.co/L3BzdyaZFo

​​Horizen announced a partnership with GameStation, a decentralized multi-chain gaming launchpad, and marketplace, to elevate play-to-earn gaming through enhanced decentralization and security.

Ergo has announced a partnership with Conceal Network. A bridge has been established, which brings the ability to token swap between each other.

Godwoken, an EVM compatible Layer 2 blockchain on Nervos, is now live on mainnet beta. With Godwoken and Force Bridge live, Ethereum developers can use their existing codebases to begin porting their dapps to Nervos.

The community celebrated the 13th anniversary of the release of the Bitcoin whitepaper. The peer-to-peer cash system designed by Satoshi laid the foundation for today’s blockchain technology, and has grown to over a $1 trillion market cap, and is now secured by about 160 EH/s days and nights from miners around the world.

Happy birthday Bitcoin, we are all gonna make it!

All around the world cryptocurrency supporters and proponents of blockchain technology are celebrating the 13th anniversary of the #Bitcoin white paper which showed how to use proof of work to solve the Byzantine Generals Problem and create digital scarcity.

The first Merge Community call is scheduled on November 5, at 14:00 UTC, and is calling for discussion amongst those who work in the space, including wallets, apps, explorers, and Infra providers.

Monday reminder that @TimBeiko and I are hosting a Merge Community call in a few days!

DM me if you work on a wallet, explorer, exchange, web3 provider for an invite 📨https://t.co/oDoTBFIyBV

A new proposal for the Decred DAO about a program of economic education and outreach, is now up for community feedback.