Bitcoin starts a new year in a big way with new hashrate ATH, billionaire buy-up, and solid progress on its adoptions. 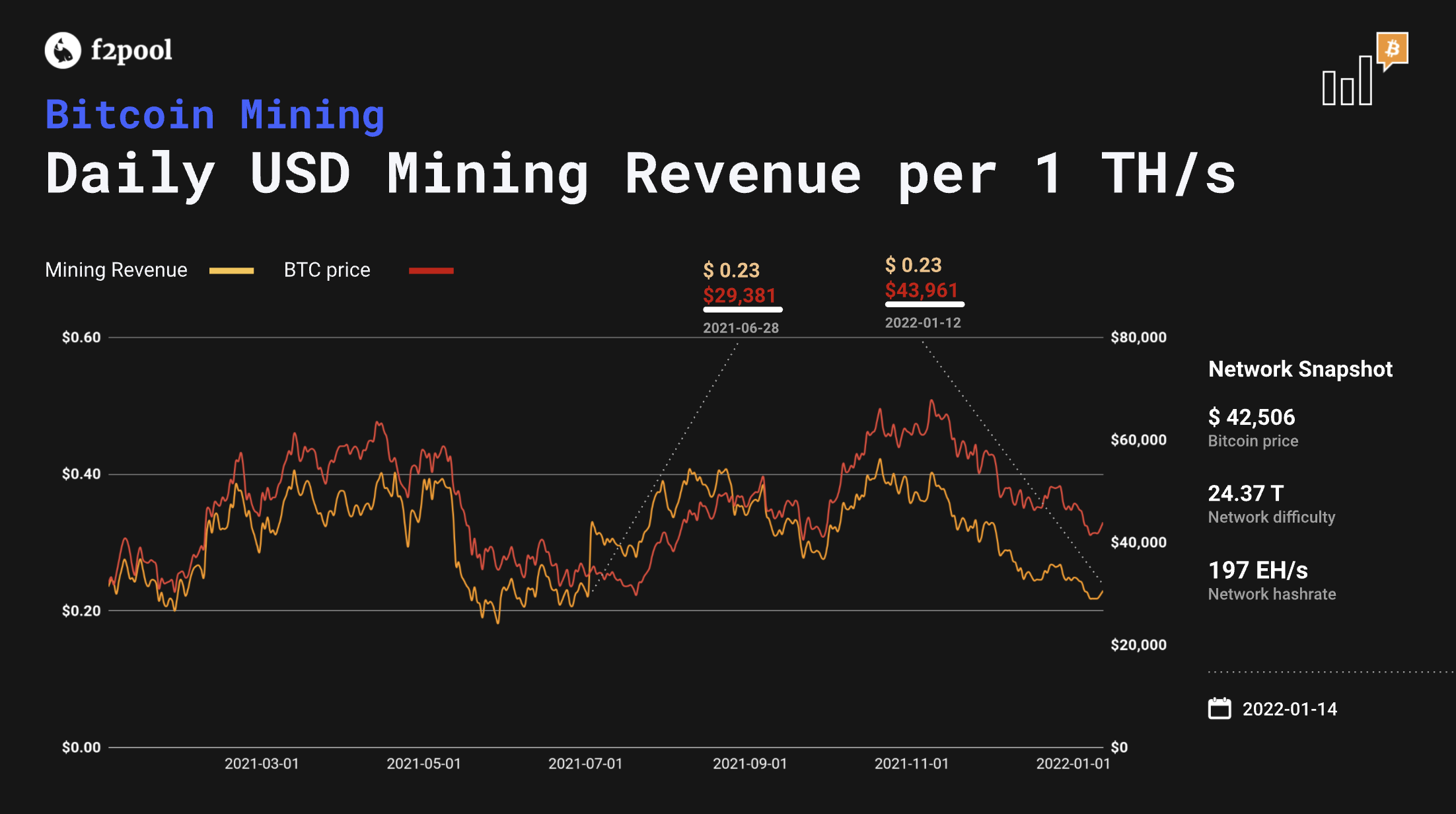 The bitcoin network hashrate reached new ATHs during the past two weeks, reaching close to 200 EH/s despite hiccups due to regional gridlock that affected bitcoin mining. With combined factors of the price dropping and hashrate climbing, the current unit revenue of Bitcoin mining is around $0.23 per 1 TH/s - the same level as the end of last June. 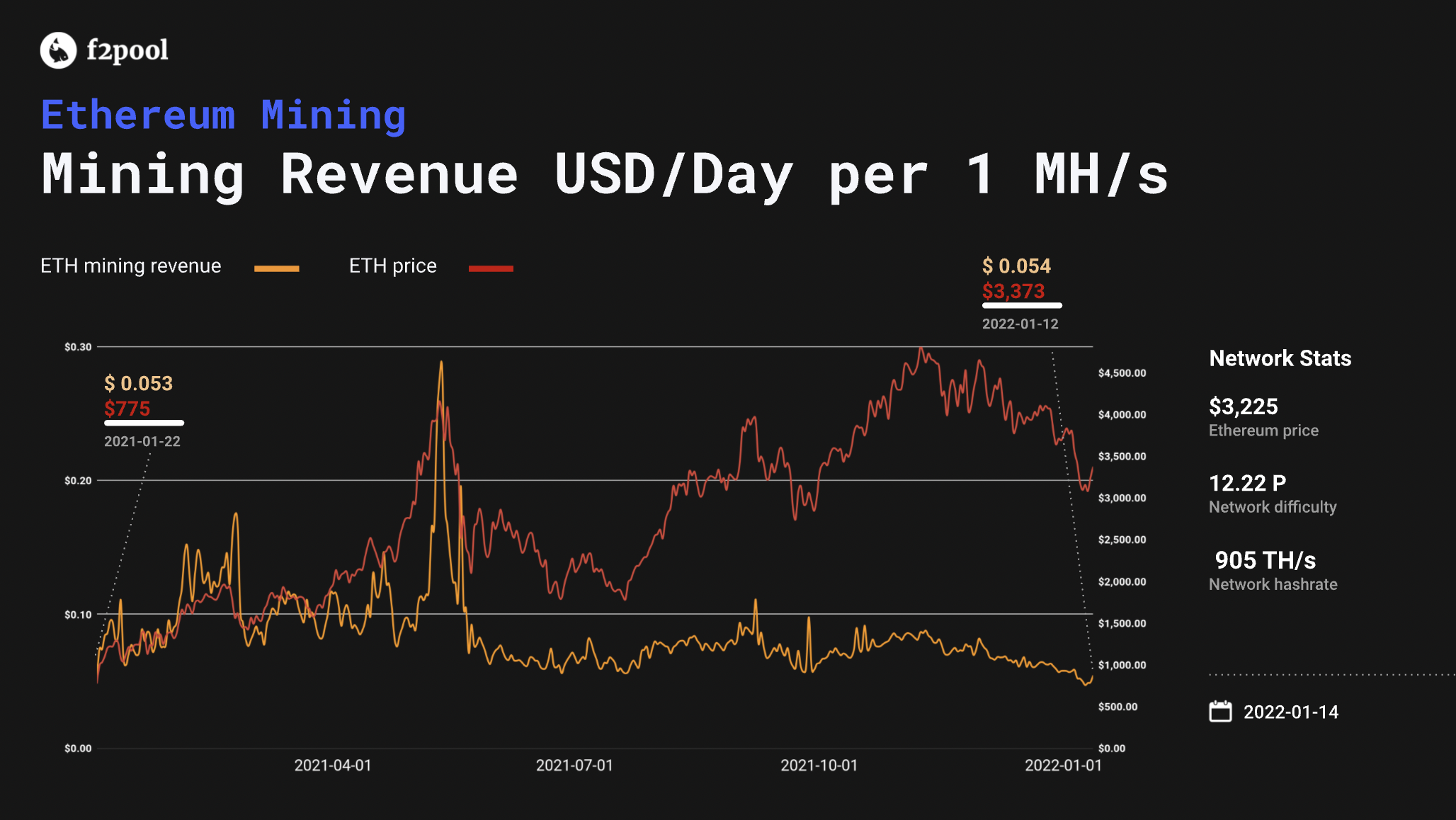 Ethereum network performs a similar hashrate trend to Bitcoin. The highest average difficulty of 12,425.837 TH was recorded on 2022-01-09, following the gains of network hashrate. As a result, unit mining revenue decrease to $0.0543 per 1 MH/s.

The first BIP-119 deployment and review workshops wrapped up successfully on 2022-01-11. The workshops are scheduled as a recurring meeting to discuss BIP-119 reviews and deployments topics. BIP-119 is a proposal to achieve a next-generation smart contract for Bitcoin.

The first Ethereum Core Devs meeting of the new year was last week. The priority of EIPs to deploy is the focus of the call. Read this page to view conversations related to Shanghai planning.

The first release candidate of v0.21 with taproot support is now available for download. The formal version will be available after testing and signing by the devs. Find additional updates from the previous month on the MimbleWimble update post.

Starting in January 2022, development work on the Core-Geth client, a distribution of Go Ethereum will receive funding from the ETC Cooperative. Read more.

Jack Maller at Strike announced that Argentines who use Strike can hold a stable cash balance that can be spent instantly and with zero fees. He proposes Strike as a solution to counter the country’s long history of hyperinflation.

Today, we launch a superior financial experience to a country that faces hyperinflation, predatory payment networks, and unusable cross-border transfers

Today, we use the world's open monetary network, #Bitcoin, to give hope to the people of Argentina pic.twitter.com/Z2RYLxmKSL

Adam Aron, the CEO of AMC Theaters, shared the company’s timeline of Dogecoin support. It’s estimated to be available in March - along with Shiba Inu.

I have been repeatedly asked when AMC expects to routinely accept Dogecoin and Shiba Inu for any and all payments made via the AMC web site and mobile app. I am being told that we are still well on track for the promised Q1 implementation, with exact timing most likely in March. pic.twitter.com/QSBvLAMHKx

Our roadmap is here and 2022 is going to be our biggest year yet! #Horizen is working on:

and much more! 😎 What are you most excited for? pic.twitter.com/BBiDP6QB8e

Thank you, Satoshi Nakamoto, whoever, wherever, whatever you are.

Billionaire Bill Miller revealed that he is investing 50% of his net worth in Bitcoin and related companies such as Microstrategy, Bitcoin miner Stronghold Digital, and software company MicroStrategy.

In a recent Reddit AMA, Vitalik Buterin shared his takes on why the future will be “multichain” but not “cross-chain.” He also shared his research analyzing multidimensional EIP-1559.

My argument for why the future will be *multi-chain*, but it will not be *cross-chain*: there are fundamental limits to the security of bridges that hop across multiple "zones of sovereignty". From https://t.co/3g1GUvuA3A: pic.twitter.com/tEYz8vb59b

From 2022-01-14 to 2022-01-16, ETHGlobal is hosting NFTHack - an event bringing together a virtual collective of passionate creatives and developers for a weekend NFT hackathon and summit. Save this YouTube page for the latest workshops and speeches at the event.

the dogecoin community donated 163428 doge to help with the effort ~ an amazing show of generosity shibes :)

proud of the generosity of the community, much impressed!

well done, internet ~ good things can happen when we all work together https://t.co/Ea2zWOWIEc pic.twitter.com/n9GlzGySL0