Despite the price crash, the network’s hashrate reached a new ATH, mining is still tasting good, and adoption is increasing. 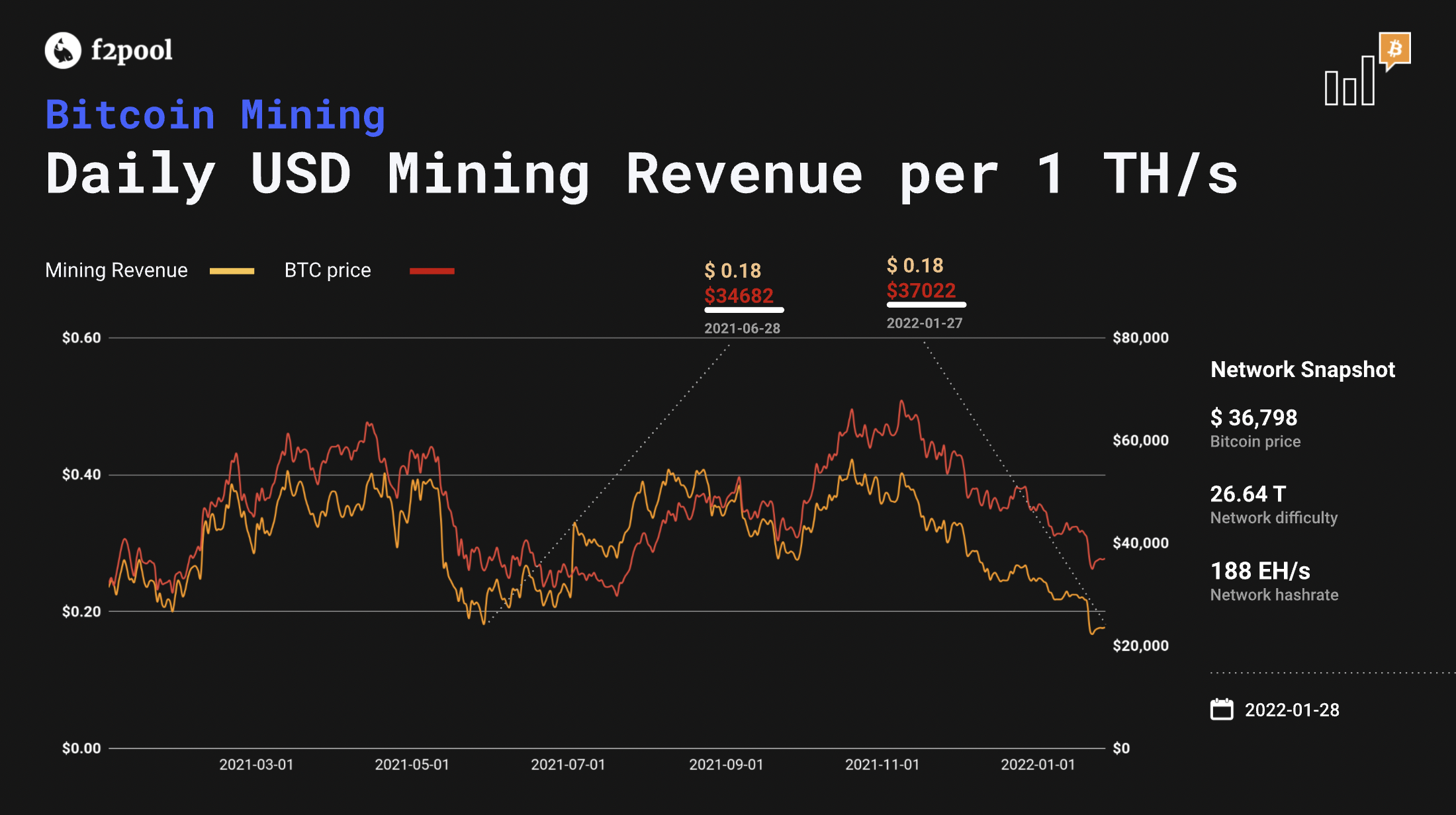 On 2022-01-21, the factors of market downturn and network difficulty ATH acted together on the mining profitability, starting another complex new two-week cycle. The current unit revenue of Bitcoin mining is around $0.18 per 1 TH/s, dropped back to the same level as it at the end of June 2021.

The recent significant adjustment of +9.32% reflected the recent fierce competition on hashrate. The good news is that, despite the massive drop in prices, most Bitcoin ASIC machines remain profitable. Advanced models are now in a safe price zone; even old models such as the Antminer S9 series can still keep on running with profits. The network hashrate is still stably growing.

More news about mining rigs. Intel closed the sale for its upcoming bitcoin mining chip. Intel and GRIID agreed on a deal that provides GRIID with fixed-price bitcoin mining ASIC hardware by Intel for orders placed before May 2023. Read more. 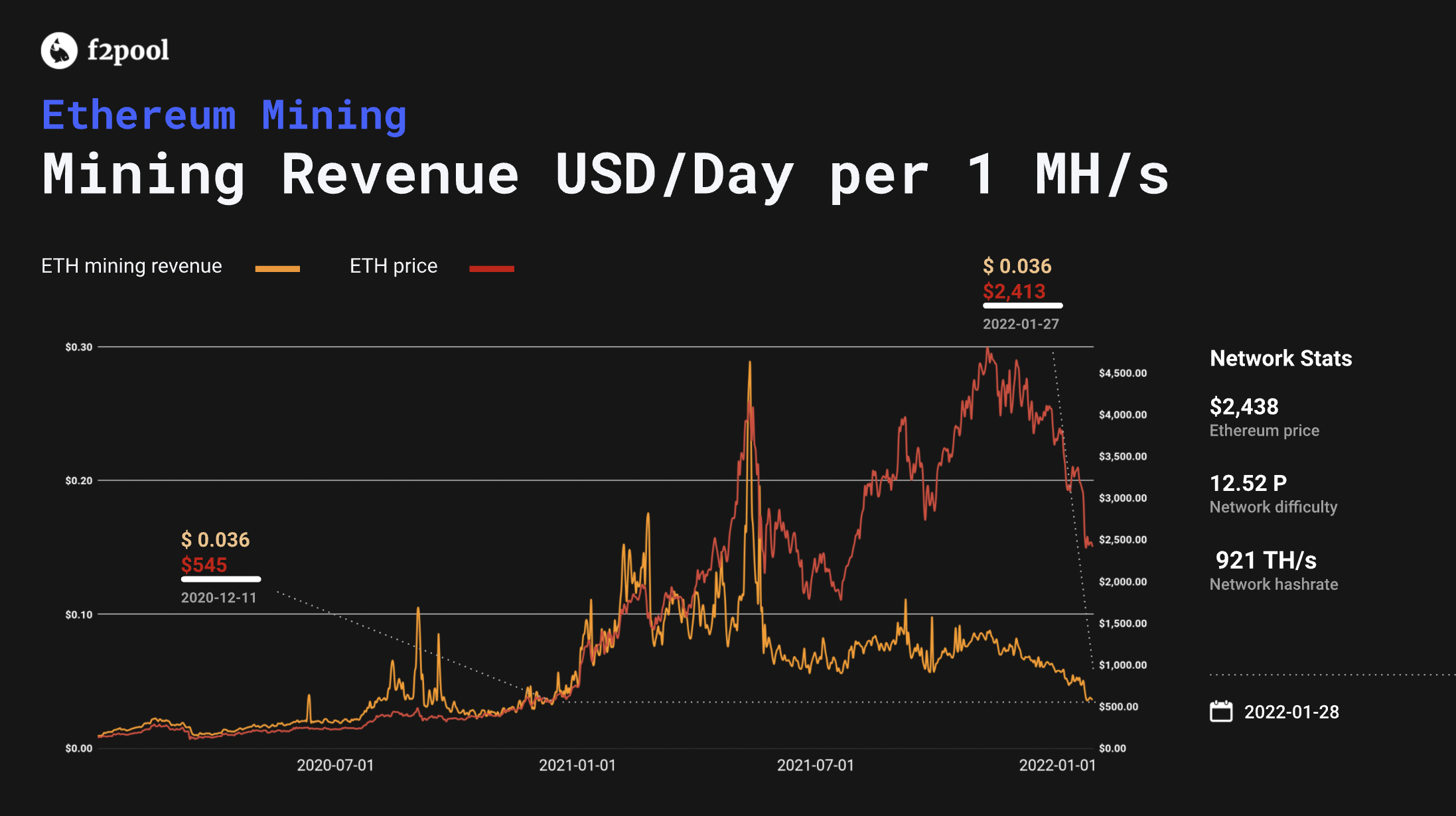 Ethereum profitability drops back to the level in December 2020, with similar combined factors of price and hashrate. The new ATH on Ethererum hashrate was recorded on 2022-01-26. Currently, the unit mining revenue decreased to $0.036 per 1 MH/s, despite the significant decrease in revenue, Ethereum miners, similar to Bitcoin miners, are also not threatened by the price change, as hashrate reflects.

The recent Ethereum Core Devs meeting took place on 2022-01-21. One of the main subjects in the discussion was some potential EIPs for the Shanghai upgrade. Read this thread for a summary of it.

Ethereum has terms updates. “Eth1” has been renamed to “execution layer” and “Eth2” to consensus layer,” according to Ethereum’s Q1 roadmap, for better clarification and inclusivity of Ethereum. As for the Merge, here is an updated webpage for more information.

Ethereum Classic’s Mystique hard fork will be activated at block 14,525,000, estimated to occur on 2022-02-13. The upgrade will implement some proposals (EIP-3529, 3541) of Ethereum’s London upgrades on the Ethereum Classic network to foster compatibility across these networks.

ECIP-1104, called 'Mystique' is coming. It implements a subset of changes found in the Ethereum Foundation London hard fork.

We are reaching out to all #EthereumClassic node operators and provided a blog post detailing all the necessary information.https://t.co/B520ZasfKm

Litecoin community is counting down for MimbleWimble enabling at the end of January. Instead of layer 1, this privacy-focused tech will be implemented through layer 2.

$LTC #Litecoin #LTC “This means mimblewimble on Litecoin will make it the most accessible privacy coin and create lots of demand for LTC” vid by @coinbureau #MWEB $DOGE #Dogecoin #DOGE pic.twitter.com/ks4uLXUK5p

Dogecoin developer is working on a payment channel on testnet, that allows sending several payments to a service.

Getting closer to a resolution concerning the payouts for contributors to Dogecoin Core 1.14.4-1.14.5, with all #Dogecoin Core Maintainers having joined the discussion at this point: @JRossNicoll, u/patricklodder, @michilumin, and @langer_hans.https://t.co/vYW03FNoPt

​​Decred v1.7.0 “Based Bison” has now been released with four consensus votes.

Twitter is adding NFT as a profile picture, by connecting their crypto wallets. Twitter Blue subscribers can now test setting an NFT as their profile picture in the iOS app. Currently, it only supports static image NFTs minted on the Ethereum blockchain. Check out this post to learn more about it.

Ready to show off your NFT? Follow these simple steps to connect your crypto wallet and let’s see your NFT PFPs! pic.twitter.com/epSL7VXG5o

Bob Wallet 0.9.0 was released. It added new support for Name claims and SPV mode, along with a few UI/Performance improvements. Please make sure your seed phrases are securely backed up before the upgrade.

Digiwallet, an open-source wallet, and we DigiAssets v3 were announced recently. Click here for a detailed introduction of the new wallet, and here for downloading the explorer.

Jack Dorsey announced a legal defense fund for developers working on Bitcoin and related projects such as the Lightning Network, Bitcoin privacy protocols, and the like.

The Dash’s January newsletter is out covering the latest partnerships and development updates.

Kadena has updated its 2022 live roadmap covering both the completed milestones and upcoming ones.