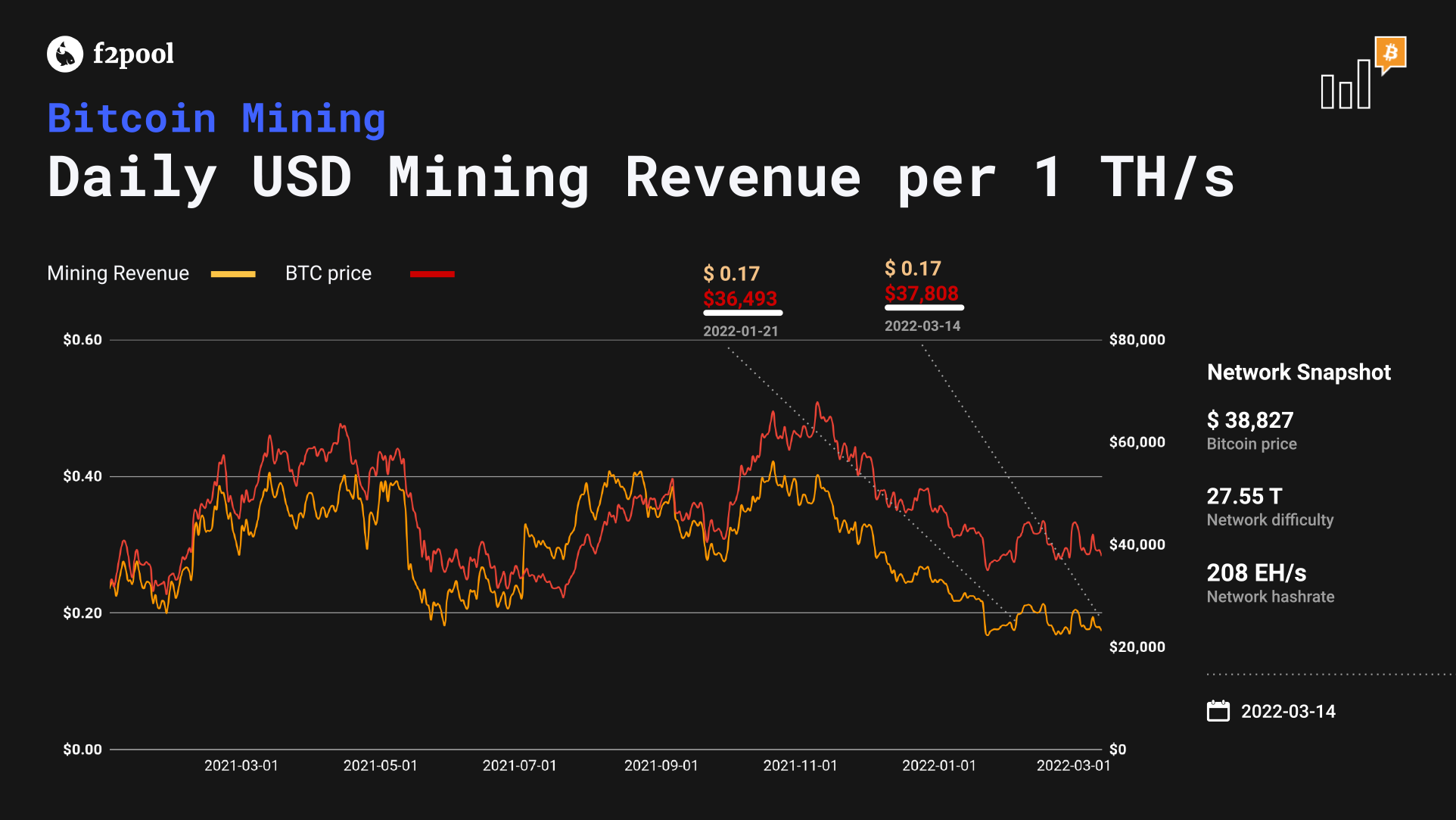 Bitcoin saw its first drop in difficulty after six cycles of gaining in difficulty. With a -1.49% change, the next adjustment is estimated as another slight decrease.

Mining profitability remains at the same level as the previous 2-week cycle and hasn’t fluctuated significantly, compared to 50 days ago, as prices remain stable. 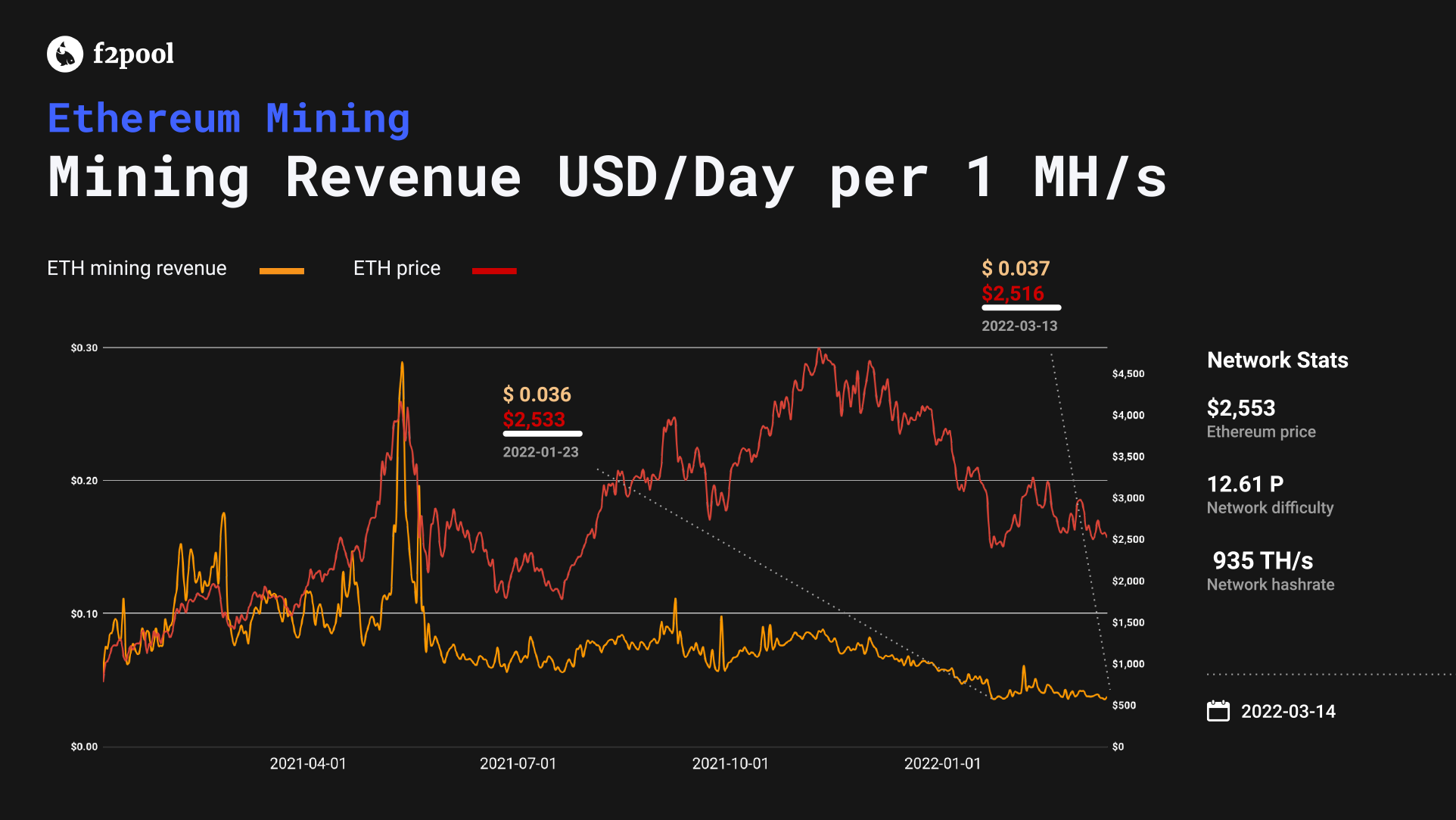 As a result of low participation in NFTs and Defi, the average gas price hit an eight-month low level below $4.1, which recently was a single-digit Gwei per transaction.

The name of The Merge was finally announced as “Paris”. It follows the Devcon city name convention and highlights the first large community-organized conference.

Meanwhile, Kiln testnet launched The community is testing The Merge by running infrastructures, sending transactions, and testing setups before The Merge is available on other testnets.

A previous core dev meeting happened on 2022-03-05. Check the EIPs and discussion for the future of ethereum in this video.

Four consensus agendas included in Decred v1.7 began voting on-chain. To check out the status, refer to this page.

A summary of the proposed consensus changes and links to their respective DCPs are included below:

Kaddex and X Wallet team up with Simplex to bring fiat on-ramp services into Kadena DeFi.

Spats, Firo’s research paper, was released to extend the Lelantus Spark to support confidential assets and provide privacy to a wider ecosystem.

Yuga Labs, the creator of Bored Ape Yacht Club, acquired the CryptoPunks and Meebits collections from Larva Labs and will give full commercial rights to the NFT holders.

Some big news to share today: Yuga has acquired the CryptoPunks and Meebits collections from @LarvaLabs, and the first thing we’re doing is giving full commercial rights to the NFT holders. Just like we did for BAYC and MAYC owners. pic.twitter.com/lAIKKvoEDj

MyDoge Wallet, a non-custodial online wallet of Dogecoin is available on the App Store.

a dedicated dogecoin wallet was just released for iOS - non-custodial and seems pretty easy to use! https://t.co/EtLHPIf9uC

The first handshake NFT auction Handshake Tarot is happening on 2022-03-16.

EU just voted again on banning PoW mining. The ECON committee of the EU Parliament voted against the PoW-ban, with 32 against and 24 in favor, paving the way for an innovation-friendly crypto-regulation that will set standards worldwide.

The ECON committee voted against a provision that would limit Proof-of-Work mining in the EU, passing an alternative rule.@namcios covers the news:https://t.co/28xUPHHlw1

Many Ethereum events are happening all around the world in March. There is Ethereum Rio from March 11 to 20, ETH Austin on March 17 and 18, and ETHDubai from March 29 to 31.

HandyCon is going to live this week. There will be an online conference and hackathon in the upcoming days for builders and the broader community.

Kadena’s February report launched with a variety of ecosystem updates.

Let’s take a look at the accomplishments and exciting developments within our ecosystem during the past month! pic.twitter.com/OwYpA9rzDV

The Digibyte February update is out with the latest progress on partnership and adoptions.