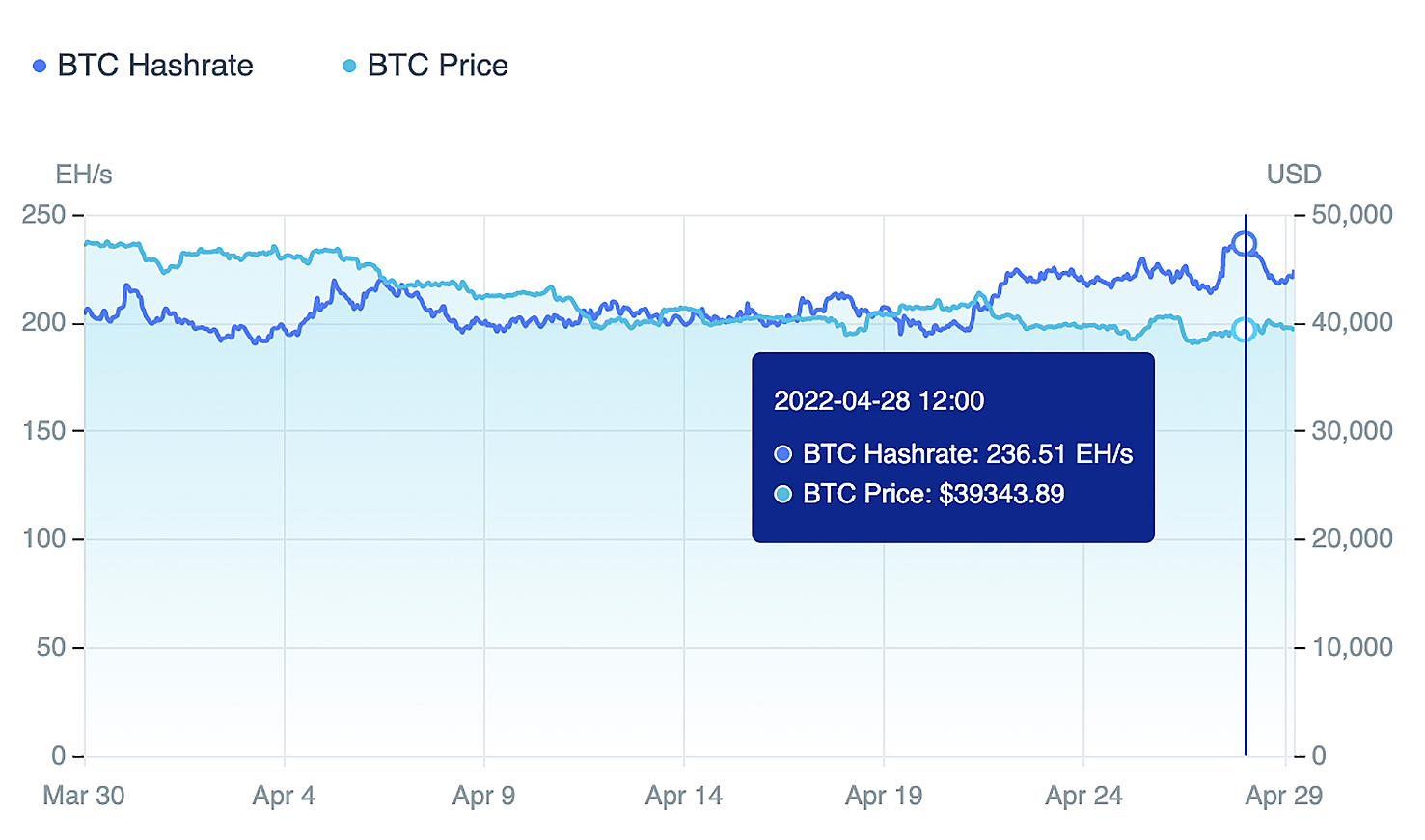 That also indicates a fiercer competition with increasing difficulty and falling price. The unit revenue falls down to $0.16 per 1 TH/s, compared to $0.18 two weeks ago.

Similar to the trend of Bitcoin, Ethereum also saw its highest hashrate during the past few days. The highest number was 1,063 TH/s on 2022-04-18. At the time of writing, the unit revenue is around $0.04 per 1 MH/s, which is slightly lower than that of two weeks ago.

Bitcoin Core 23.0 has been released with many improvements, including wallet, peer-to-peer communication and network, fee estimation, and so on. To learn more about the new changes, you may check out this post.

Bitcoin Core 23.0 was released!
It is available from https://t.co/hP6wtyct16
Release mail: https://t.co/4Nmle1Fwcx

Ethereum continues to test The Merge. The mainnet shadow fork 2 has been undergoing the test very smoothly. Adrian Sutton reviews the test in this Twitter thread.

So MainNet shadow fork 2 went extremely well today. Here’s a quick run down of what we learnt (at least from what my point of view)…

The latest Ethereum Core Devs Meeting is going to take place on 2022-04-29. Topics on Merge updates, shadow fork updates, and more will be discussed. Devs are also expected to reach a decision on the merge testing progress, which will decide whether the difficulty bomb will be delayed as previously discussed.

Taproot has been locked at block height 2249856. MWEB’s locking in is also approaching. At the time of writing, the progress is more than 43% in Window 5 of the signaling period. View the progress here.

Hathor introduced its upcoming rate limits for its public transaction mining service, capping it at 20 requests per minute starting from 2022-05-23. Users will be required to access an API key if they require extra rates. Check details here.

Dash v18 Release Candidate is now available for use on testnet. The formal v18 is going to be a major release and will introduce many improvements. Check the product brief to learn more.

During the voting period, several new consensus rules have been locked in, thus they will be activated at block 657280 in less than 2 weeks.

A new discussion on whether to speed up token emission speed has been brought up in the Firo community. Pros and cons have been mentioned, and a poll is possible to be initiated if the discussion gains sufficient traction.

As per community feedback, a new thread on our forums has been opened to discuss a potential change in token emission schedule and tail emission for the long term sustainability of the project. We appreciate your feedback! https://t.co/thTRMKT6yw

Panama has passed a bill that would give Bitcoin legal status and remove capital gains.

Panama moves to adopt #Bitcoin (and cryptocurrencies). The law just needs to be signed by the president. It would give Bitcoin legal status and remove capital gains. Another domino. https://t.co/EpNiq2FlOi

Goldman Sachs has offered its first Bitcoin-backed facility, which could be considered a significant step to accelerating Bitcoin adoption.

Scaling the technology alone is not enough. If we want to scale our networks, we must scale our values alongside them.

In pursuit of this mission, we are excited to announce the Optimism Collective.https://t.co/0TVwdhkgPv

The first Dogecoin transaction that does not require the Internet was made via RadioDOGE.

Radio Doge will enable access to #Dogecoin for people outside the reach of internet. #Starlink @elonmusk pic.twitter.com/cFKZ97mluD

From May 6th-27th, hack the future of finance alongside builders and creatives from around the world. Plus, catch three single-day summits focused on the DeFi ecosystem!

The Ethereum Foundation report has been published. This report summarizes the foundation’s achievements in 2021, explains its philosophy and principles, and also shares how the foundation allocated resources in 2021.

This is a new way to communicate our core values, explain what makes the EF unique, and share information about all of the ways that EF teams contribute to our vision of Ethereum as an Infinite Garden.

The website ethereum.org shared its Q2 roadmap. Several items, including merge prep, revamping the Wallet pages, redesigning the Learn page and more are aimed to be shipped in Q2.

Kadena has announced a $100M grant program for web3 builders. All high-quality, open-source projects for gaming, metaverse, NFT, Web3, DeFi, and DAOs are open for application.

We’re thrilled to announce a $100M grant program to inspire builders to innovate on the @Kadena_io network!

If you’re a builder or developer looking to build on #Web3, #KadenaEco is ready to empower YOU to create new projects that transform the world!https://t.co/3EL3UKkzog pic.twitter.com/8CjFmv2E7I

Xaya’s Q1 update has been released, bringing news including Game Channels tests, working on Polygon, SME rebrand, and so on.

Horizen has released its Q1 review. It includes various highlights, such as adding new integrations and pairs, tokenization platform, and progress on zkAudit, SDK and EVM compatibility prototype.