A draft BIP for package relay is shared, while Ethereum tests the merge to reach a new milestone. 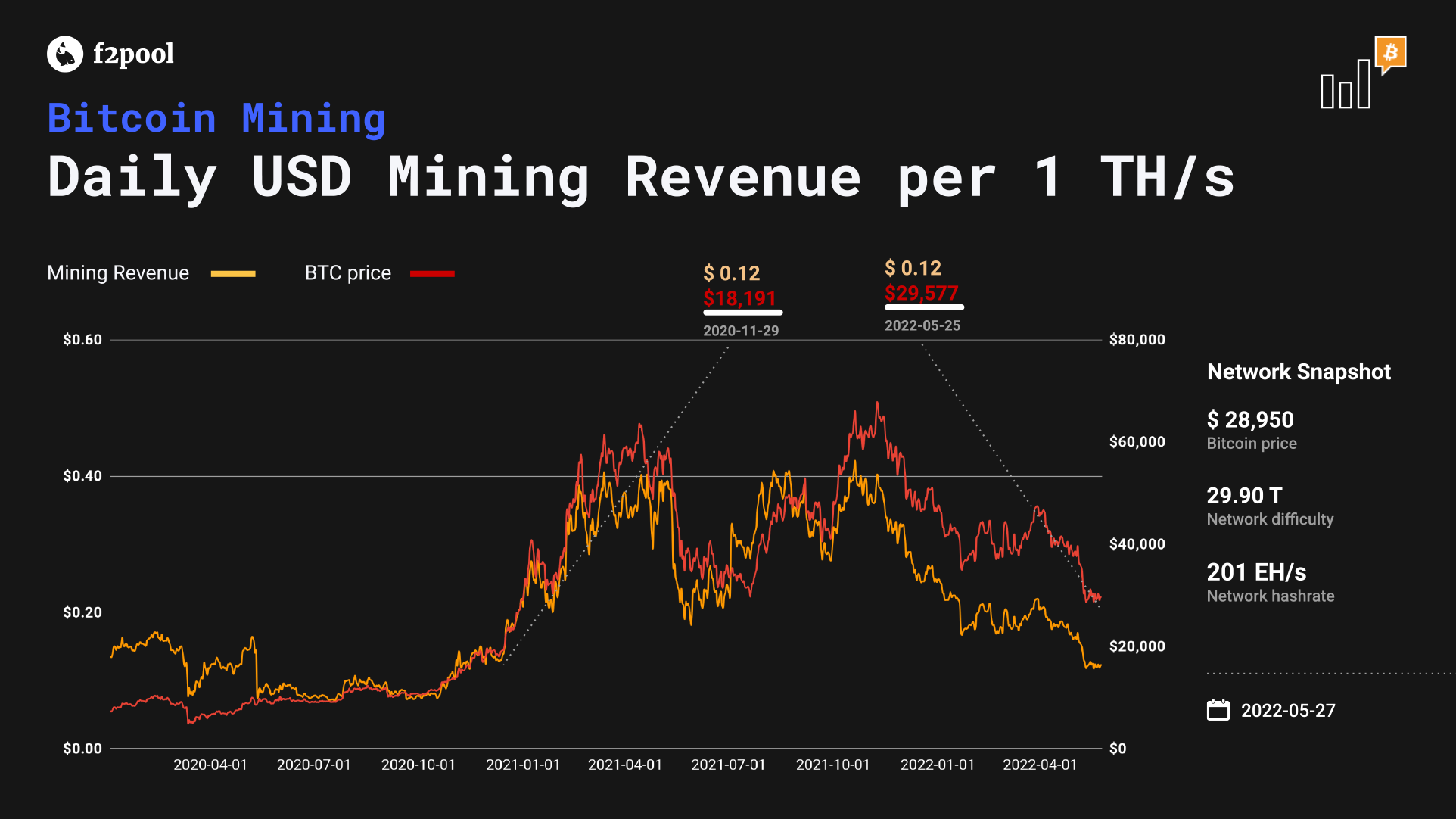 More ASICs approach their breakeven prices. At the time of writing, miners with unit power of 60W/T could barely generate profits since the electricity cost rate was around 95%, and the cost rate for miners with a unit power above 65 W/T was more than 100%. This means that their electricity costs had exceeded the revenues that could be brought by the miners at the power rate of $0.08 per kWh. You may learn more details about this topic on f2pool’s Popular Miners page.

The Ethereum network has experienced a drop in hashrate, from its ATH of 1126 TH/s to the recent 1064 TH/s. The unit revenue also fell down from a level around $0.3 to $0.24 per 1 MH/s. The fall was expected to be affected by the market downturn and the difficulty bomb, which gradually slowed down the block production.

To learn more about the mining field, we recommend you to read our Mining Weekly News.

Gloria Zhao posted a draft BIP for package relay, a feature to effectively make the CPFP fee bump below the minimum feerate being accepted by the nodes. Learn more about this feature in the following podcast.

@glozow drops by to chat about her Package Relay proposal and working on Bitcoin Core. Feel free to listen with all your ancestors and descendants. https://t.co/y00ggaFufy

Pseudonym w0xlt created a proof of concept implementation of Silent Payments (private, non-interactive payments for Bitcoin) for Bitcoin Core and is looking for people to help with testing.

On 2022-06-08, the merge on Ropsten, an Ethereum public testnet, is expected to happen as an important step forward towards the merge.

Discussions related to the shadow fork and the merge will be continued in the upcoming Core Devs Meetings scheduled on 2022-05-27. Please stay tuned.

The Litecoin MimbleWimble has finally been activated on 2022-05-19. This brought not only higher community engagement, but also an hashrate increase of around 500 TH/s on the activation day.

Decrediton v1.7.3 has been released, addressing a couple of issues.

Today we’re happy to announce that we’ve partnered with Asset Reality (@asset_reality) to give victims of cryptocurrency scams a chance at recovering funds that have been stolen.

TokenMint has launched its Phase 2 with Token Generator on testnet.

Xaya Names is now mintable on Polygon for use cases, such as ERC721 tokens, primarily for in-game usernames and decentralized IDs. Learn more here.

The community celebrates the 12th Bitcoin Pizza day. Bitcoin has been proven as sound money and has been gaining value over time since its first use for purchasing goods in 2010.

Central bankers gathered in El Salvador to talk about Bitcoin adoption. Financial representatives of 44 countries visited El Salvador and saw how the country’s Bitcoin adoption is changing the place for the better. Review this event by reading this post.

Central bankers and financial regulators from 44 countries enjoying their second day of talks about financial inclusion, banking the unbanked, and #Bitcoin adoption in @Bitcoinbeach and in El Salvador 🇸🇻 pic.twitter.com/OVgpwaUNyO

The Merge Community Call #4 is going to happen on 2022-06-03. Issues being covered will include the Ropsten Merge, the impacts on the applications after the merge, and more.

can you hear it? 🐼 the echo from a thousand whispers of 𝓌𝑒𝓃 𝓂𝑒𝓇𝑔𝑒 washes over you..

The April edition of the Decred Journal is out now, covering DCRDEX improvements and the activation of the 4 consensus changes.

Hathor released its Q1/2022 report, summarizing all the developments led by Hathor Labs on Hathor Network.