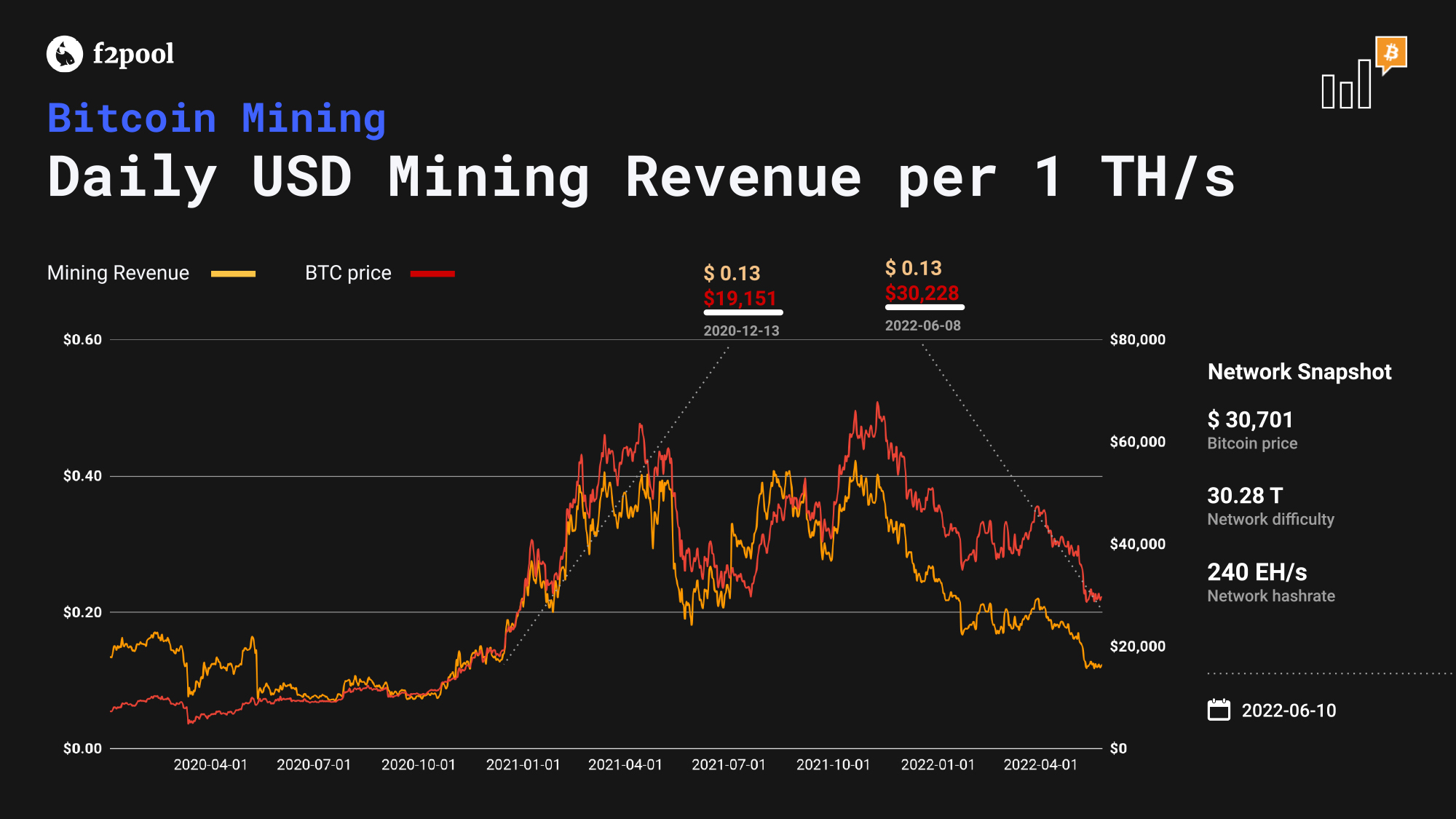 On 2022-06-08, the Bitcoin network difficulty increased by a rate of 1.29%, reflecting in the hashrate scale which was recovered slightly. Mining Revenue for 1 TH/s increased to $0.13.

What to note is that the network has just now made a new hashrate ATH at 266 TH/s, estimated from the actual block times.

In news about mining-related policy, New York State Senate has passed a bill that places a two-year moratorium on PoW cryptocurrency mining with fossil fuels. Governor Hochul decided to delay action on this bill and said “We’ll be looking at all the bills very, very closely. We have a lot of work to do over the next six months.” Read more.

Ethereum average transaction fees have dropped to a 12-month low as the chart shows, and the same trend we’ve seen for the mining revenue which dropped from $0.024 to $0.022 per 1 MH/s, due to the difficulty bomb, which causes the average block time to become longer.

To learn more about the mining field, we recommend you to read our Mining Industry News.

Ropsten testnet completed the merge test successfully on 2022-06-08, this thread recaps the event. The devs will monitor the chain over the next few weeks to make sure no client pairs go out of sync. More merges will happen on other Ethereum testnets.

The latest Core Devs Meeting took place on 2022-06-10. EIP-5133 that proposes delaying the difficulty bomb to mid-August 2022, has been discussed. The devs are aiming for a ~2 month delay, and for the upgrade to go live late June.

Dogecoin devs are working on version 1.14.6. Network and security improvements, new functionality for the RPC interface, implementation of the dust limit enabled with 1.14.5, and more are expected in this new version. Learn more about the process with this release plan and checklist.

The DigiByte devs are working towards DGB v8.22, which will provide the most robust testing framework DGB has ever had, check the latest progress here.

Jack Dorsey’s TBD has announced web5, which is built on the Bitcoin network. Web5 brings decentralized identity and data storage to individual applications.

this will likely be our most important contribution to the internet. proud of the team. #web5

Horizen’s token creation platform, TokenMint has announced its upcoming maintenance and next steps. The maintenance is to prepare for transitioning to mainnet.

#TokenMint will be undergoing maintenance between June 14-20th to prepare for the upcoming transition to mainnet! Learn what this means in our latest blog!https://t.co/ftm6N2ITqM

Hathor introduced its Enhanced NFT Metadata Standard. The main addition to the standard is a field for royalties, which can store information about different creators who should receive a piece of the payment on secondary sales.

JAY-Z and Jack Dorsey are funding The Bitcoin Academy, a program for residents of Marcy Houses in Brooklyn, New York.

This program aims to provide education, empower the community with knowledge, and get rid of some of the barriers so that residents can learn more about Bitcoin specifically and finance in general.

Mr @sc and I are funding The #Bitcoin Academy, a program for residents of Marcy Houses in Brooklyn New York where Jay grew up, designed in collaboration with @CryptoPlug3 and @BlkBTCBillions: https://t.co/hKfq1jqii7

It’s been 1 year since El Salvador approved the Bitcoin Law. Check this story to review the Bitcoin adoption in this country for the past 12 months.

Devcon VI announced online applications and its participation details. Later this year, the Ethereum community will gather in Bogotá, the capital city of Columbia.

🥁📢 Ready, set and GO: We have embarked on the #RoadToDevcon!

The ApeCoin DAO approved an AIP to keep ApeCoin within the Ethereum ecosystem. Read the story here.

Kadena released their Ecosystem May Report. The release of Pact 4.3, the newly launched builders Discord channel and more are covered in it.

The blockchain community is having a big week in Austin, TX for Consensus 2022. Topics like Finance, NFTs, regulation, Web 3, and the metaverse, and their wide-reaching effects are being presented by 2022-06-12.

We all braved the heat in Austin to engage in conversation, see art and make connections.

Here were some key moments: 🧵 pic.twitter.com/nOUXi4RB7U