BTC and ETH mining revenues down, Ethereum difficulty bomb to be delayed, and more. 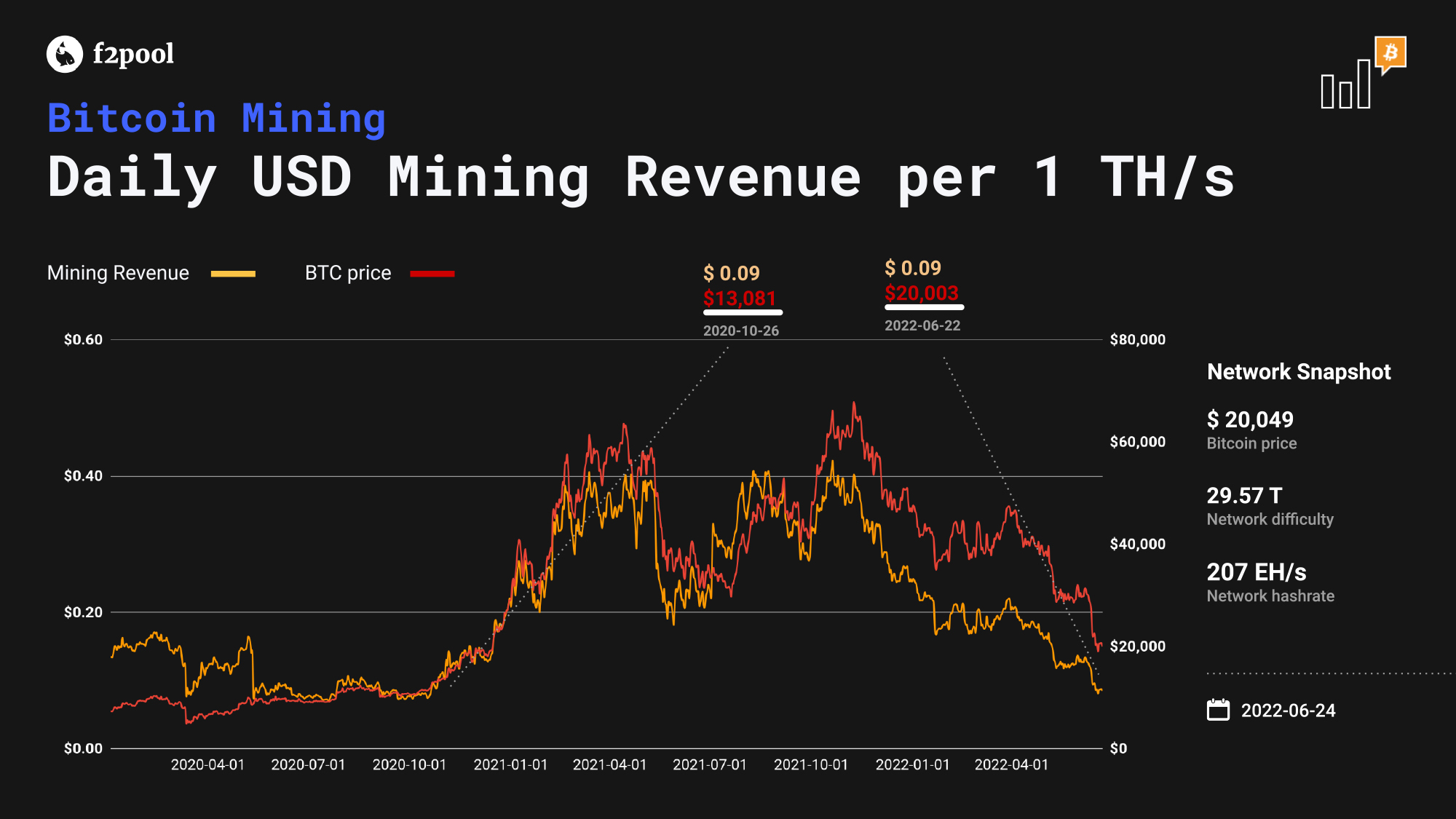 Ethereum’s hashrate is now 868 TH/s. It dropped 23% from its peak of 1126 TH/s marked on 2022-05-13. The mining revenue is now around $0.013 per 1 MH/s, while it was at $0.022 two weeks ago. As the sharp decrease happened, some less efficient GPUs are no longer making a profit now. Meanwhile, ASICs and the latest GPUs are still running stably and are bringing miners profits.

The Gray Glacier Upgrade has been announced and is scheduled to happen on 2022-06-29. This upgrade will delay the difficulty bomb by 700000 blocks further, until the middle of September 2022.

At block 15,050,000, the Ethereum network will undergo the Gray Glacier fork to push back the difficulty bomb, *hopefully* for the last time ever 😁

If you run a node or validator, make sure to upgrade 🔜!https://t.co/wmPqzQSgL7

Ethereum’s testnet Kiln, Ropsten and Rinkeby are now deprecated, while Goerli and Sepolia, will be maintained in service. Read more on this announcement.

A post recapping Litecoin’s noticeable development progress in the past two years has been shared in the community, explaining Litecoin has been exploring its own road which differs from the initial one, similar to Bitcoin’s.

Litecoin v0.21.2.1 has been released to fix a wallet bug of stealth address generation for previously upgraded wallets. Learn about the new release here.

The Strike API Documentation and Dashboard are now public, allowing users to build payment experiences on the Bitcoin network.

The @Strike API Documentation and Dashboard are now public!

Now, anyone with a Strike account can use our API to build instant, global, superior payment experiences on the world's open monetary network #Bitcoin

One Payment Platform For Everyone 🌩️🚀https://t.co/LMfB7zi3zA

Multisig is now supported in the Headless Wallet. For more information, please read their announcement.

Bitcoin is getting stronger. Learn about Bitcoin’s 12 years of development with this 60s video.

12 years of #bitcoin development in 60 seconds

ETHNewYork will commence this Friday. This event, organized by ETHGlobal, is a major hackathon event happening from 2022-06-24 to 2022-06-26, providing the community an opportunity to build the Ethereum ecosystem.

‼️ Our registrations are officially closed for #ETHNewYork🗽 ‼️

👇🏼In the meantime check out our schedule and prizes: https://t.co/7NVinzP7VN pic.twitter.com/HmgXyyTMh4

The May issue of Decred Journal is out. It summarizes core software releases, GoDCR, new proposals, and hashrate changes during the month.

The DigiByte Alliance has been granted 501(c)(3) status by the IRS, and is now recognized as a tax exempt public charity. This achievement could facilitate the acceleration of adoption and innovation of the DigiByte blockchain.

Nervos is now presenting the BlockJam2022, an online gaming conference starting June 17th. Insightful talks and sessions by gaming experts, and a 14-day hackathon with a prize pool of $50,000+ are scheduled.

Kadena announces a new series known as Project Spotlight to highlight projects being built on the Kadena blockchain. The series starts with Lago Finance which develops stablecoins.