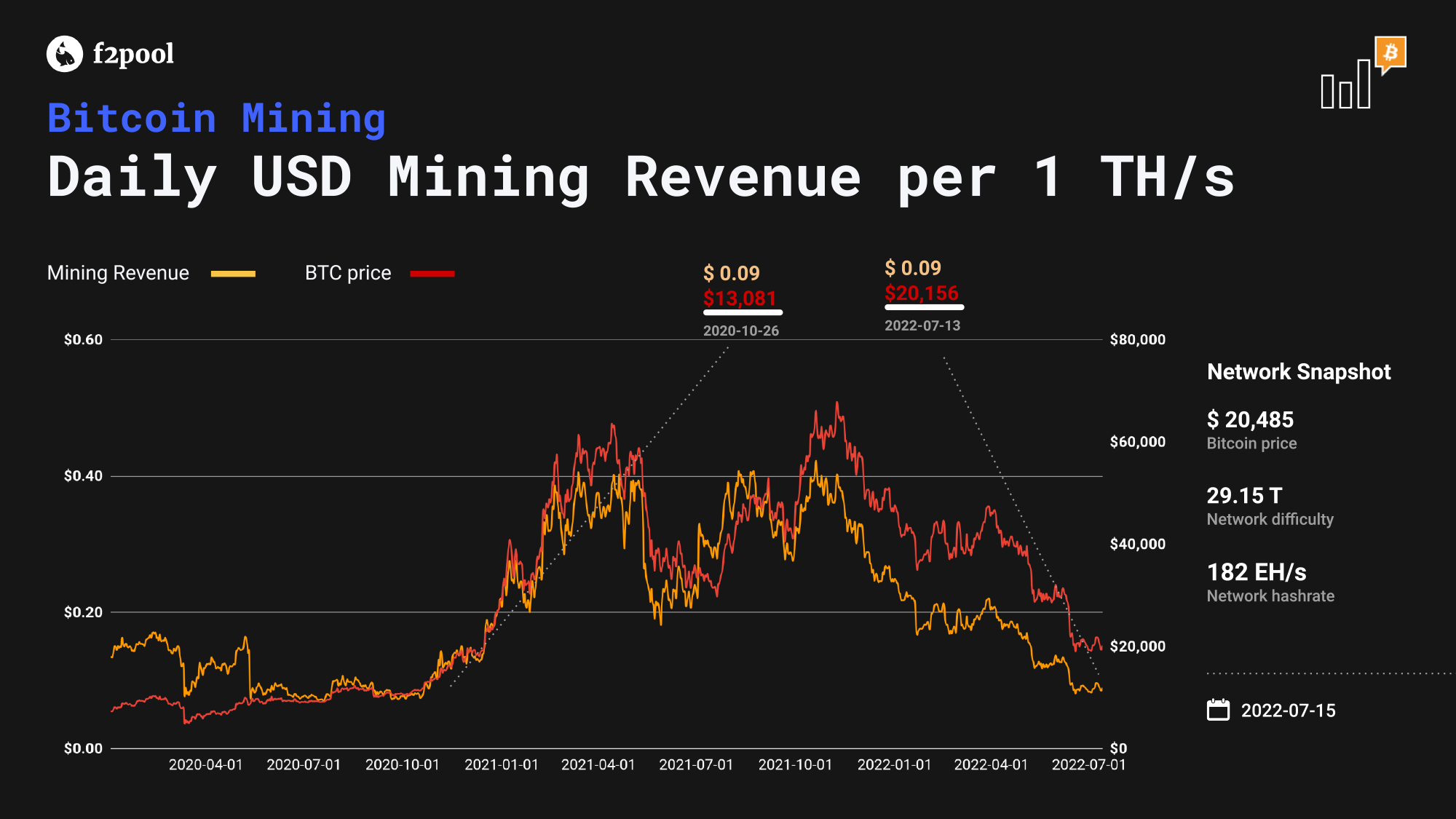 The Bitcoin mining revenue has been keeping the same level since the sharp decrease about one month ago, with every 1 TH/s generating $0.09 currently. This aligns with the trends of the price and the hashrate scale.

The latest difficulty was adjusted one week ago with a -1.41% change, with an average hashrate of 208 EH/s in that two-week cycle.

Ethereum’s hashrate is now around 900 TH/s, which also did not change a lot in the past 3 weeks. However, with the difficulty bomb being delayed, the miners’ ETH rewards have increased under the same hashrate scale.

Blockstream has shared their current progress on the research into the half aggregation of Bitcoin’s Schnorr signatures. They provide a draft BIP with a formal specification that can be used to prevent multiple classes of security issues, and potentially will assist formal software verifications in the future.

The #BlockstreamResearch team is excited to share the current progress on our research into the aggregation of signatures based on curve secp256k1, including an early draft BIP for non-interactive half-aggregation of BIP 340 Schnorr signatures. 🔏https://t.co/up0YhyrjwT pic.twitter.com/44DL3YcZbe

As the Gray Glacier upgrade, which pushes back the difficulty bomb, has been deployed in the mainnet, Ethereum’s block times have been back to around 13 seconds. Daily block productions have jumped back by around 20% compared to those a week ago before the upgrade.

To catch up with some major dev progress in Ethereum, you may check out Tim Beiko’s latest AllCoreDevs Updates.

The initial design for light clients was shared by David Burkett in the June update of Litecoin development. Check here for the details.

Hathor released v0.49.0 of its full node. This version introduces an initialization speed up and a new UTXO API.

The New York Yankees partners with NYDIG to allow its employees to be paid in Bitcoin. Employees of the Yankees organization are offered access to NYDIG’s Bitcoin Savings Plan (BSP), which allows the employees to convert a portion of their paychecks to Bitcoin.

MakerDAO has approved a proposal to create a DAI vault for Huntingdon Valley Bank, with a ceiling of $100 million, as a new collateral type in the Maker Protocol.

MKR holders have approved the addition of HVBank, a 100 million DAI debt ceiling participation facility proposed by the Huntingdon Valley Bank, as a new collateral type in the Maker Protocol. pic.twitter.com/HWqisl9xfi

Hathor has updated its statistics page and introduced a new way to dive into historical blockchain data.

X-Wallet, a web extension wallet on Kadena has recently released its mobile app on the Google Play store.

Lago.finance, which builds DeFi infrastructure on Kadena, recently shared a sneak peak at the upcoming bridge between Ethereum and Kadena.

Nervos launched the new and improved Nervos Layer 2—Godwoken on its mainnet with features including being 100% EVM-compatible, zero whitelisting, incredibly low fees and fast transactions.

In 12 years, Bitcoin has grown by 200 million % while some fiat money has been losing value over time, not to mention the recent huge inflation of 9.1% in June. To roll back fiat inflation, you do not need to have a time machine, try Bitcoin.

The Merge Community Call #5 will be hosted on 2022-07-15. Testnets, block time change, and more will be discussed in the call.

Litecoin announced Litecoin Summit 2022, which will take place in Las Vegas this October.

The 3rd Annual Litecoin Summit will be held at @TheLINQ hotel in Las Vegas! #LitecoinSummit2022

Horizen’s ZenCon0, the first Horizen ecosystem summit, is going to be hosted in Milan this September.

Sia foundation’s Q2 Transparency Report has been published, with highlights including being recognized as a 501(c)(3) public charity, sponsoring the MIT Bitcoin Expo and the Sia v1.5.8.