BTC and ETH mining revenue updates, and more news from the PoW networks. 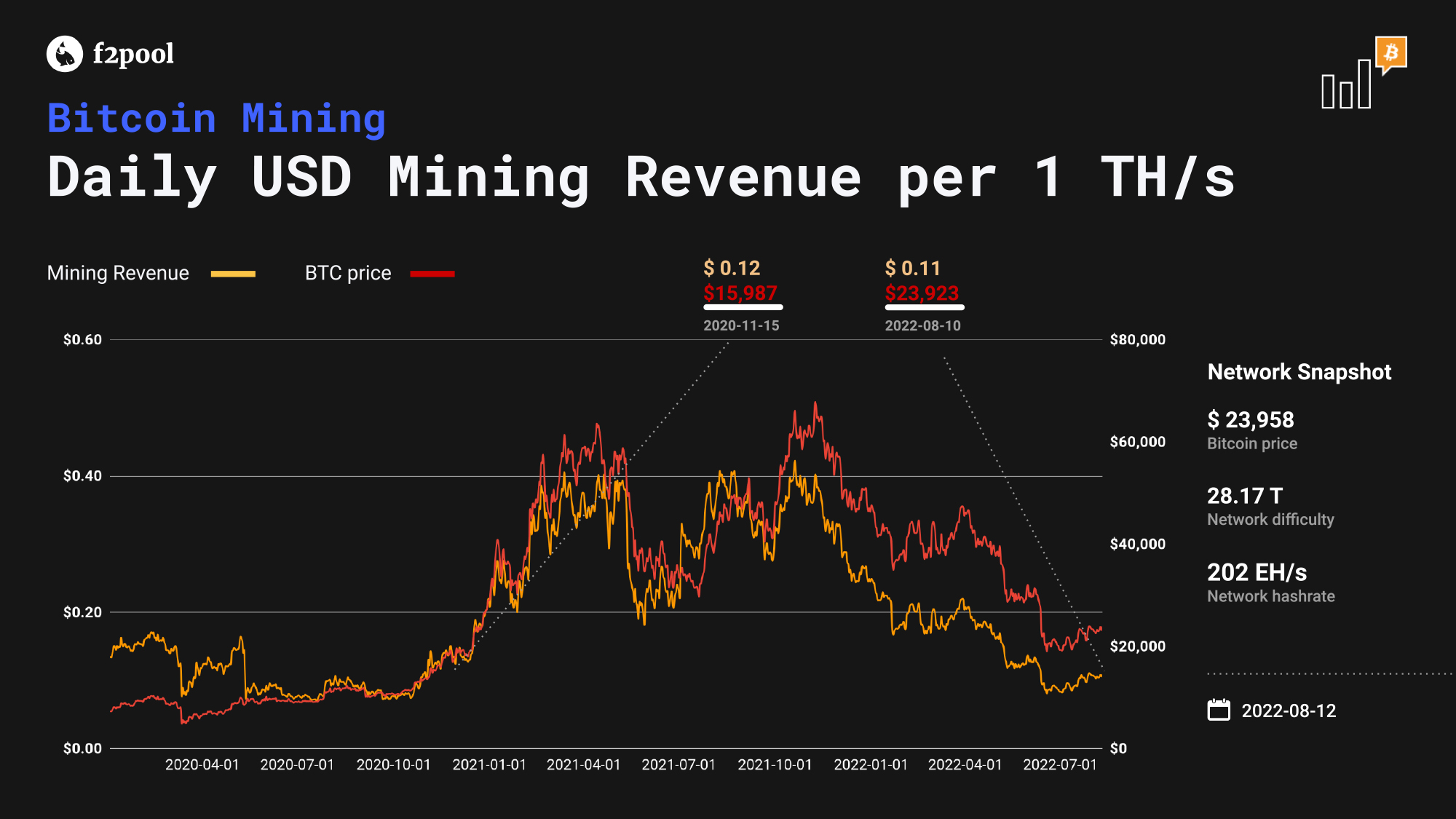 Bitcoin mining profitability has been stabilized at $0.11 per 1 TH/s during the past 2 weeks. Meanwhile, the recent difficulty adjustment of +1.74%, an increase following 3 cycles of fallings, could show the recovery trend of Bitcoin mining. 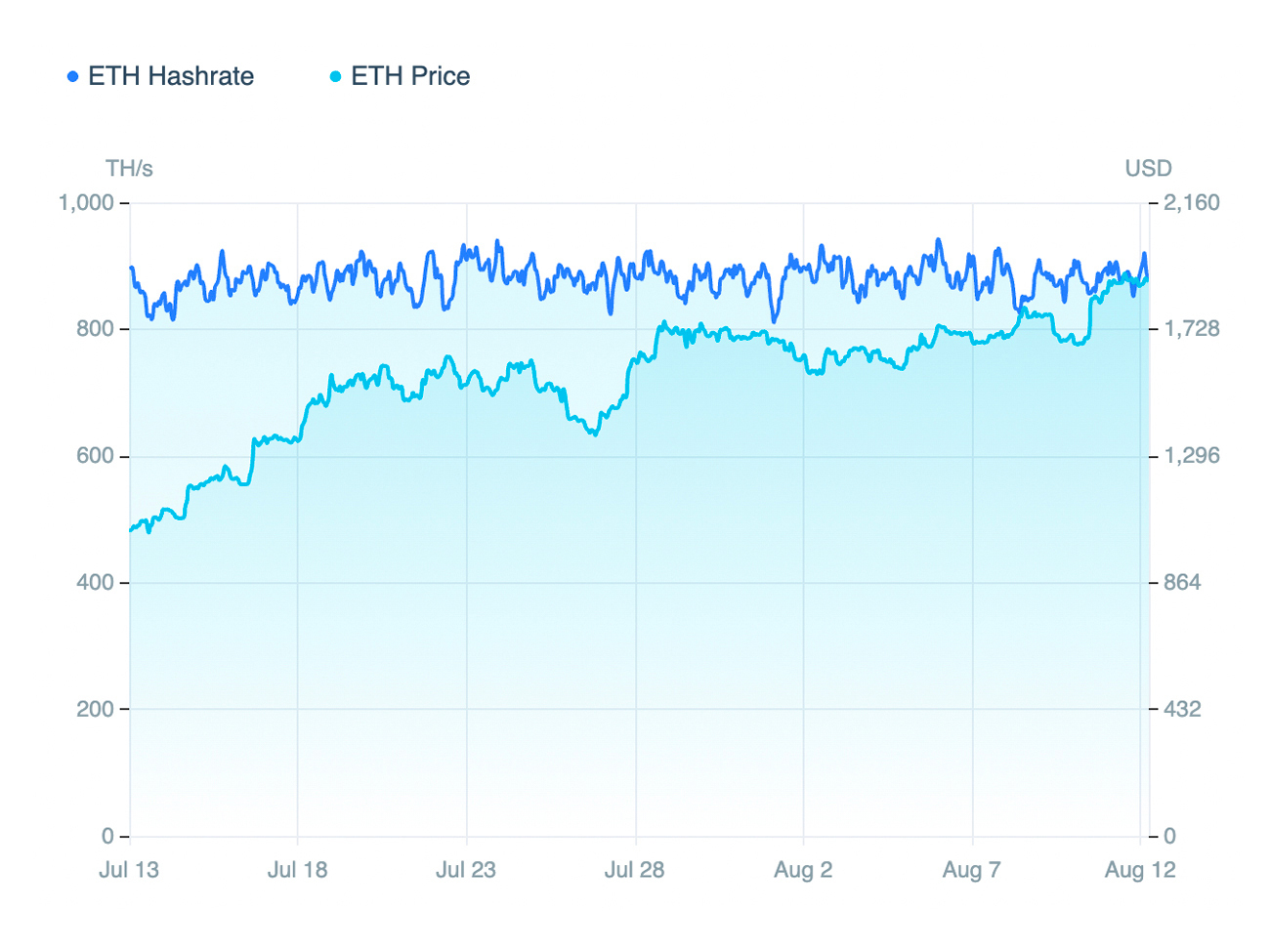 Ethereum mining revenue also sees climbs in the past two weeks. At the time of writing, it reached around 0.028 per MH/s. The total hashrate maintained at the same level while the coin price went up.

The final testnet merge before the mainnet is completed, and the core devs have tentatively set the Total Terminal Difficulty (TTD) as 58750 E on the executive layer. It is estimated to happen around 2022-09-15. By that time, PoW mining of the Ethereum mainnet will be ended.

Note: nothing is final until it's in client release, so do expect changes last minute due to unforeseen circumstances https://t.co/PQ0YOKpk1u

In the July progress shared by Litecoin core devs, the development of new P2P messages has started in July to better support light clients.

Dogecoin Foundation has released libdogecoin v0.1.0, the first version of this C library to enable direct integration of Dogecoin into many different platforms in a lightweight manner.

So after several months, many late/sleepless nights, and one false launch, #libdogecoin v0.1 is now ready play with right here:https://t.co/hcYXnt8UJX

Huge props to the rest of our small lib team, @KBluezr and Jackie (github: jaxlotl) , for the insane effort.

Horizen shares their alpha EVM, showing ZEN on MetaMask and the functionalities of the chain.

Lightning network capacity has crossed 4500 BTC and hit a new ATH. By the time of writing, it reached 4573 BTC with an 8% growth in 30 days.

Godwoken, the EVM-compatible optimistic rollup running on Nervos, has been updated to version 1.4. Learn about the highlights of the changes by reading this thread.

As MakerDAO is considering selling up to $3.5 billion USDC for ETH due to worries about the risk of contagion from the ban of Tornado Cash, Vitalik comments on Twitter that it was a terrible idea, and no single type of non-ETH collateral should be allowed to exceed 20% of the total.

Errr this seems like a risky and terrible idea. If ETH drops a lot, value of collateral would go way down but CDPs would not get liquidated, so the whole system would risk becoming a fractional reserve.

ETC Cooperative has released an ​​open letter to Chandler Guo regarding the proposed ETHPoW fork, explaining that the fork requires a huge coordination task, and the Merge is only weeks away, thus a potential hard fork is not feasible.

The Hathor Labs Q2 report is out, noting that they have been syncing up their operations and milestones during the past quarter.