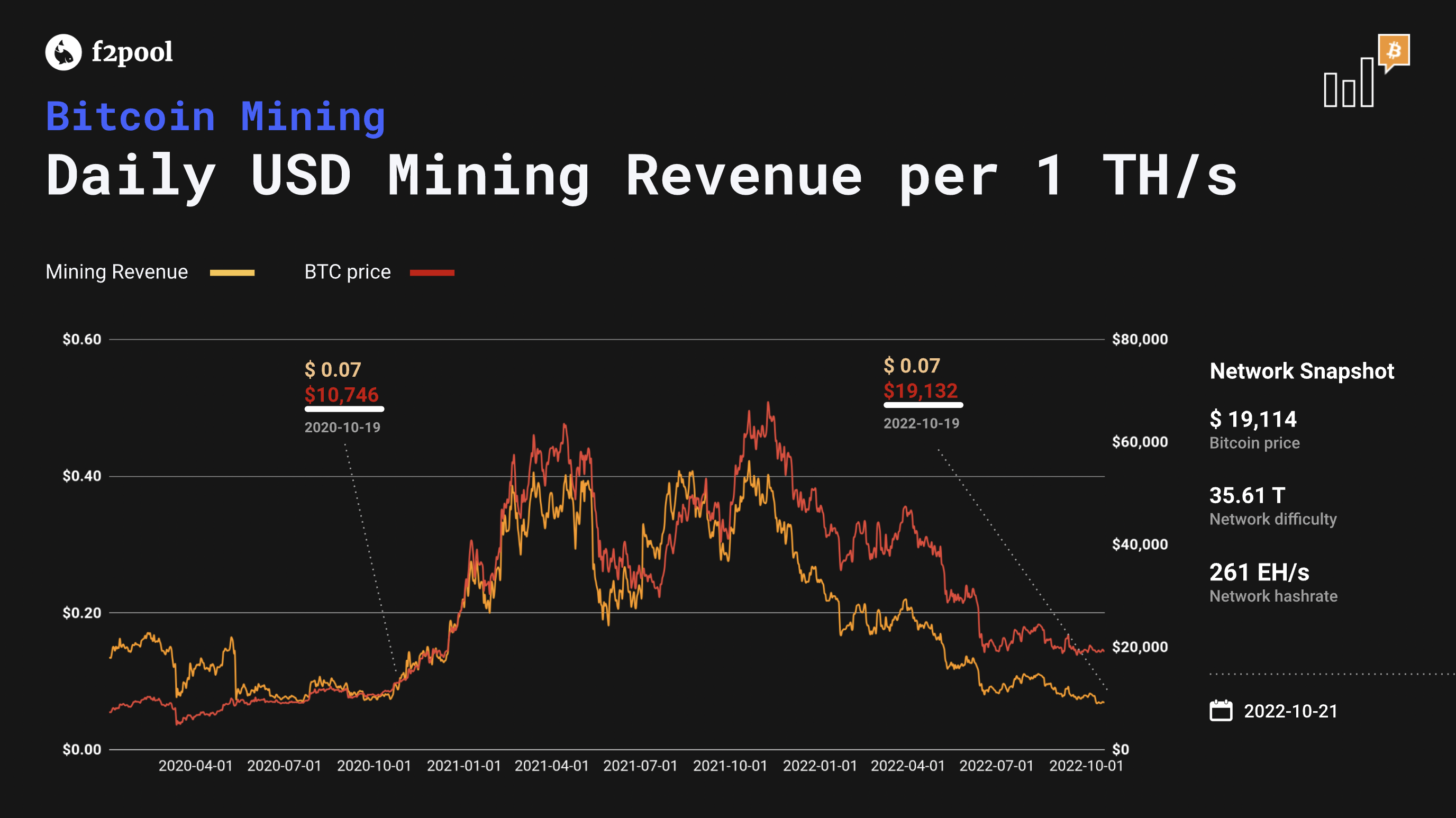 According to the estimation based on the block time so far, the next difficulty adjustment should be upward for more than 5% as well. As more machines get back online in North America and new ASICs are being shipped, the current network hashrate is around 260 EH/s.

This results in a drop in mining revenues which is now staying at $0.07 per 1 TH/s, the same level as 2 years ago. 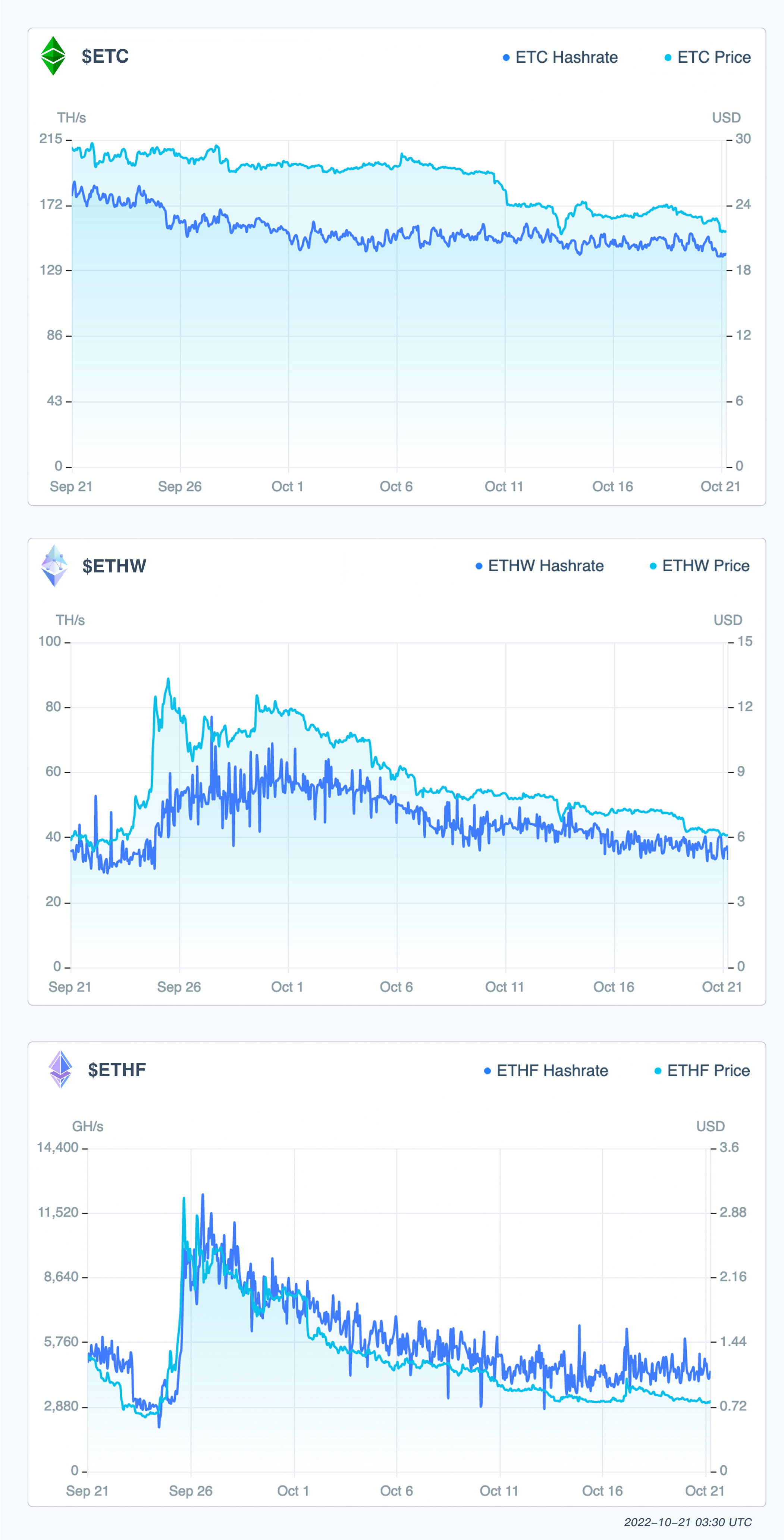 From the beginning of the month, the hashrate of ETC, ETHW, and ETHF hasn’t changed much. ETC stabilized at around 150 TH/s, while ETHW and ETHF hashrate declined slowly. Their hashrate scales at an approximate ratio of 10:1, similar to their ratio of prices. 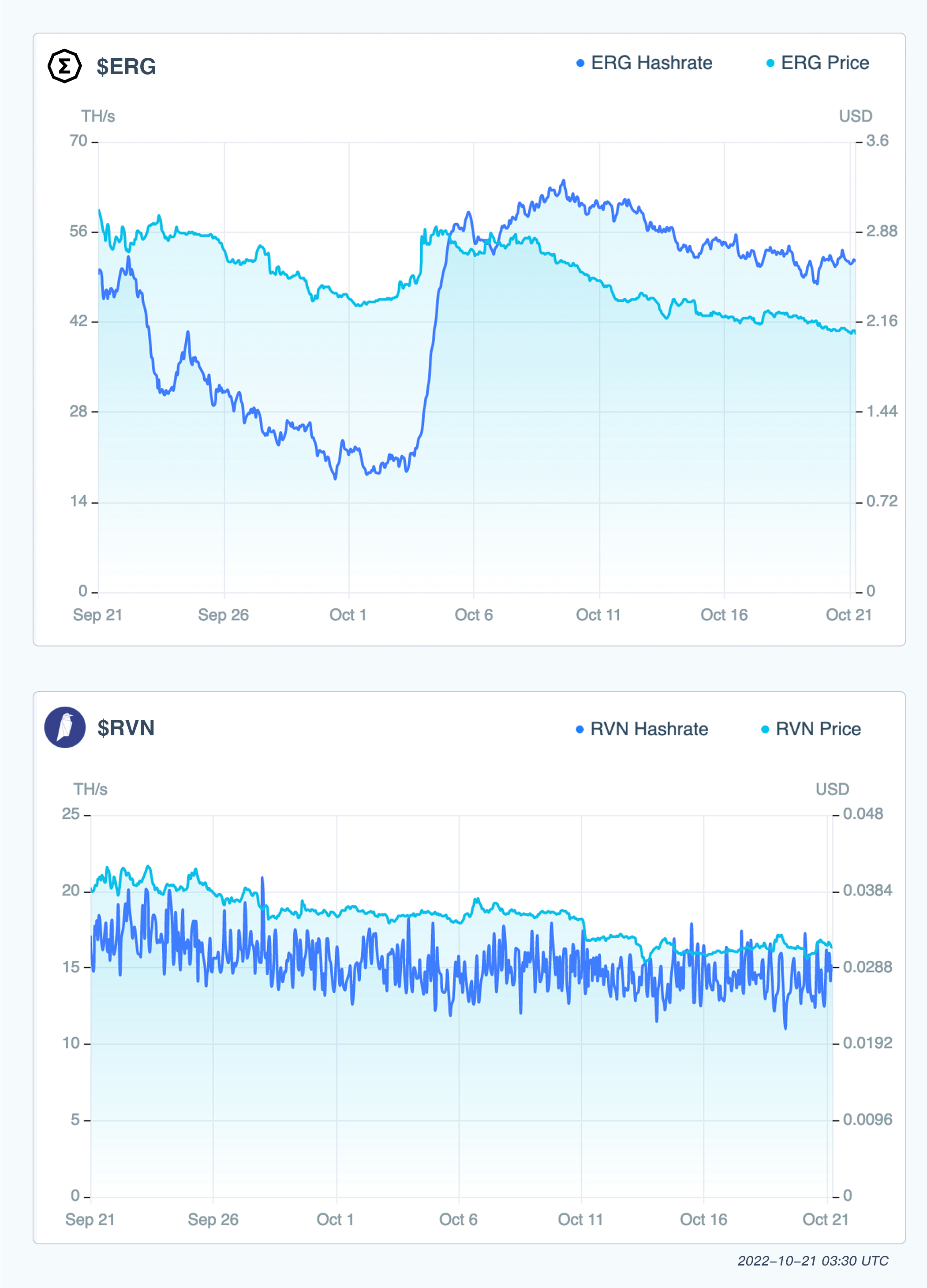 GPU prices are declining after Ethereum mining ended, though Nvidia has removed the LHR limit on their products.

Affected by the bear market, GPU coin prices are still sluggish. The mining revenues for many GPUs are now bringing only negative returns concerning electricity costs. Miners are only mining preemptively and are expecting a comeback on the price level.

ERG hashrate made a significant climb at the beginning of October, while RVN hashrate has basically been stabilized.

The BitcoinCore 24.0 release candidate 2 has been released, and now open to testing. Here is a testing guide.

Litecoin core dev shared progress in September related to light clients. The code for supporting retrieval of MWEB UTXOs for use by MWEB light clients is out for review. It was designed so that light clients can request UTXOs in batches, and verify that each batch is committed to by a recent block.

Horizen is closing in on the mainnet release of NFTs on TokenMint. For more check here.

Mastercard is launching a program to let financial institutions offer cryptocurrency. Mastercard and Paxos will handle regulatory compliance and security.

JUST IN: #Bitcoin and crypto is on the “cusp of really going mainstream.” - Mastercard’s Chief Digital Officer pic.twitter.com/ZkCwXQaKIz

America’s oldest bank, BNY Mellon announced it has added BTC and ETH as its custodial offerings.

The world's largest custodial bank says 75% of their clients are either investing or considering investing in #bitcoin and digital assets.

How it started: How it's going: pic.twitter.com/56Efm3BPeT

DCRDEX v0.5.3 has landed with Litecoin support. It allows atomic swaps with no exchange fees, and a full custody of their coins. Check more here.

Atomic Swaps are now supported on Hathor’s Headless Wallet. All Hathor assets are supported, so you can swap HTR, custom tokens and NFTs.

Bob Extension, the browser extension for the non-custodial Handshake wallet is back in the Chrome web store.

The community celebrates Litecoin’s 11th anniversary! The Litecoin blockchain has been running for 11 years without any downtime.

Fun fact: Litecoin blockchain started on October 13, 2011, but the genesis block was actually mined about a week earlier. It was mined exactly 11 years ago on October 7, 2011, 7:31am UTC. https://t.co/lArbbucLGU

The Litecoin Summit is around the corner in Vegas starting this Friday. The live stream is also available.

The community celebrated the 8th anniversary of the Verge Currency.

On October 9, 2014, #vergecurrency had its first mined block.

Thank You to Exchanges, Partners, community supporters, Team, and friends. We are #vergefam with every single one of you.#xvg #community #family pic.twitter.com/6tn9I3m8sY

Dash’s latest monthly newsletter is out. In the last month, the highlights include a new wallet version on iOS, activation of Dash Core v18 and so on. The introduction of high-performance masternode is also included in this episode.

Digibyte has released their September update summarizing the news and milestones.

Kadena has released their September ecosystem report, view more in this thread.

Sia foundation has announced the Sia Foundation’s Grants Program. This is to fund research, development, developer tools, and anything in support of their mission of user-owned data while enriching the Sia ecosystem.

Conflux has announced the launch of their Incubation Program. It will provide early-stage teams with up to $100,000 in funding to launch their projects on Conflux Space.