Keep the coins safe and go on mining. 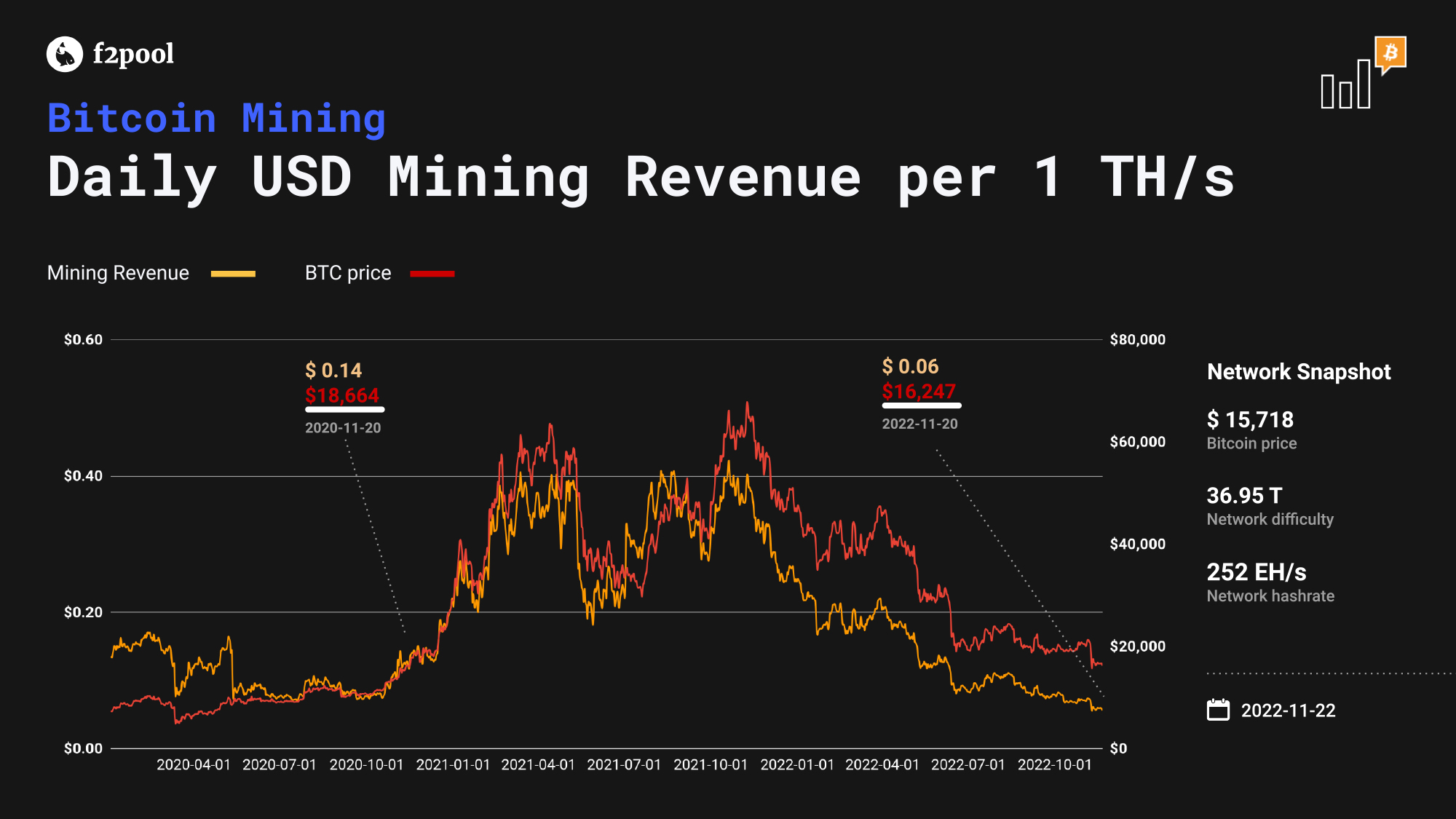 With the market seriously affected by the FTX collapse, and a continuingly high level of hashrate, the mining unit revenue drops to $0.06 per 1 TH/s, this is a record low over the past 5 years. 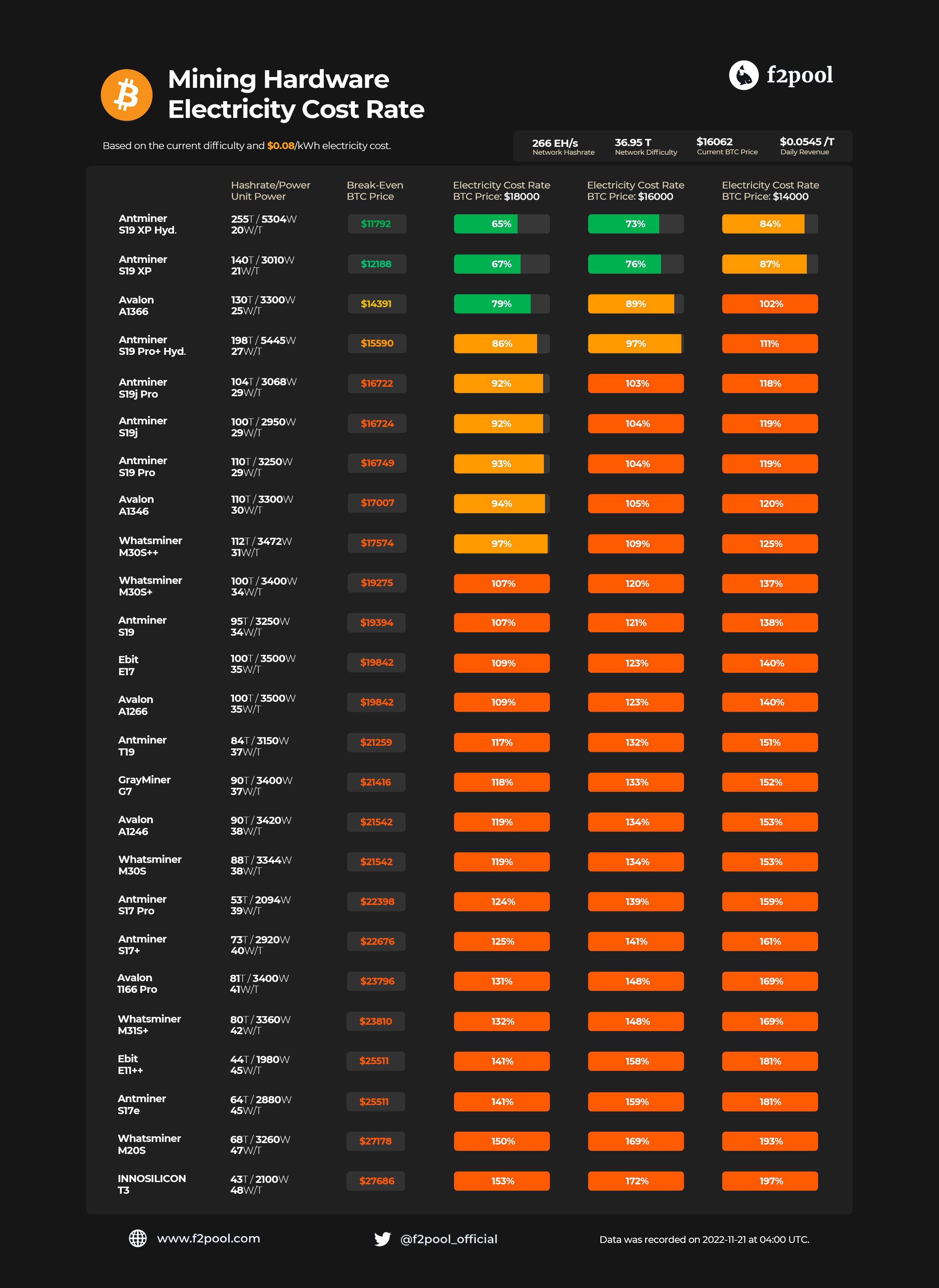 Many mainstream BTC machines are now running below their break-even BTC price if their cost rate is at $0.08/kWh or higher level. In the table above, you may have a general look at miners’ electricity cost rates, at the condition of different BTC prices.

Litecoin hashrate recorded its new ATH on 2022–11–16, at 585 TH/s, as its price hit a new 5-month high. Contrary to BTC mining’s tough situation, LTC miners are now operating in a safe zone with a relatively good margin. In addition to its Dogecoin mining rewards which have become the main proportion of the Scrypt machines, the Top 10 miners, are running with positive revenues.

No matters its ethash coins, or other GPU coins, machines are mining at loss with GPUs for a price of $0.06/kWh or higher electricity cost. This leads to drops in hashrate scales to some extent.

ETC hashrate has not been affected since it is mainly occupied by ASICs that can still mine it with a good profit.

Hathor releases its v0.52.1, which includes Sync V2 upgrade, an upgrade of the OpenSSL library to its latest version.Hathor also released some other useful improvements as well. Learn more here.

In the October updates of Decred, main tech progress, such as releases of Decred Core software v1.7.5 and DCRDEX v0.5.4 patches, was recorded.

The ETC Cooperative has announced the launch of the Safe Multisignature Wallet app on the Ethereum Classic network.

The Safe Multisig App was created by Gnosis, it was originally a prediction market dapp on the Ethereum network. Safe works on Ethereum and other smart contracts networks, and now it is compatible with ETC as well.

As FTX has collapsed and there is a big challenge on users’ funds, hardware wallet sales volumes either gain significantly or reach ATHs. Now more and more crypto holders are seriously looking into self-custodial to own their coins.

The flight to self-custody is here.

NFTs are now available on TokenMint mainnet. The new NFT functionality is currently in the Alpha version.

We are thrilled to announce that #NFTs are now on #TokenMint mainnet! The addition of the NFT capabilities is the latest iteration made to our user-focused, streamlined tokenization platform.

Learn more and launch your own NFT using TokenMint now!https://t.co/1qklRiLu1J

The Dogecoin Foundation’s Dogeathon from 2022-11-15 to 2022-11-19 has wrapped up, with the Much Wow Award being announced. Individuals and teams joined from anywhere online or in person with key Dogecoin Devs in Australia.

The Hathor Labs Q3 report is out, with an insight into Hathor’s operations and milestones for Q3 2022.

Dash has released their October updates, with highlights from the tech and marketing teams.

Elaborating on the theme of Mining and Minting, Ergo is hosting a Mini Summit on 2022-11-26, stay tuned.

Elaborating on the theme of Mining and Minting, we are hosting a Mini Summit showcasing ErgoHack V proposals alongside some videos from the core team!

Be sure to tune in on Saturday, Nov 26th, as we release content throughout the day!#DiscoverErgo #Blockchain #Crypto pic.twitter.com/0mqEYAhPAo

Nervos Networks community celebrated the 3rd anniversary of the Nervos mainnet. Over the past years, The Nervos Network has reached around 1.5 Millions unique addresses.

It’s been a year of an incredible journey with even greater growth ahead!🚀 pic.twitter.com/iR1mjlzvyp