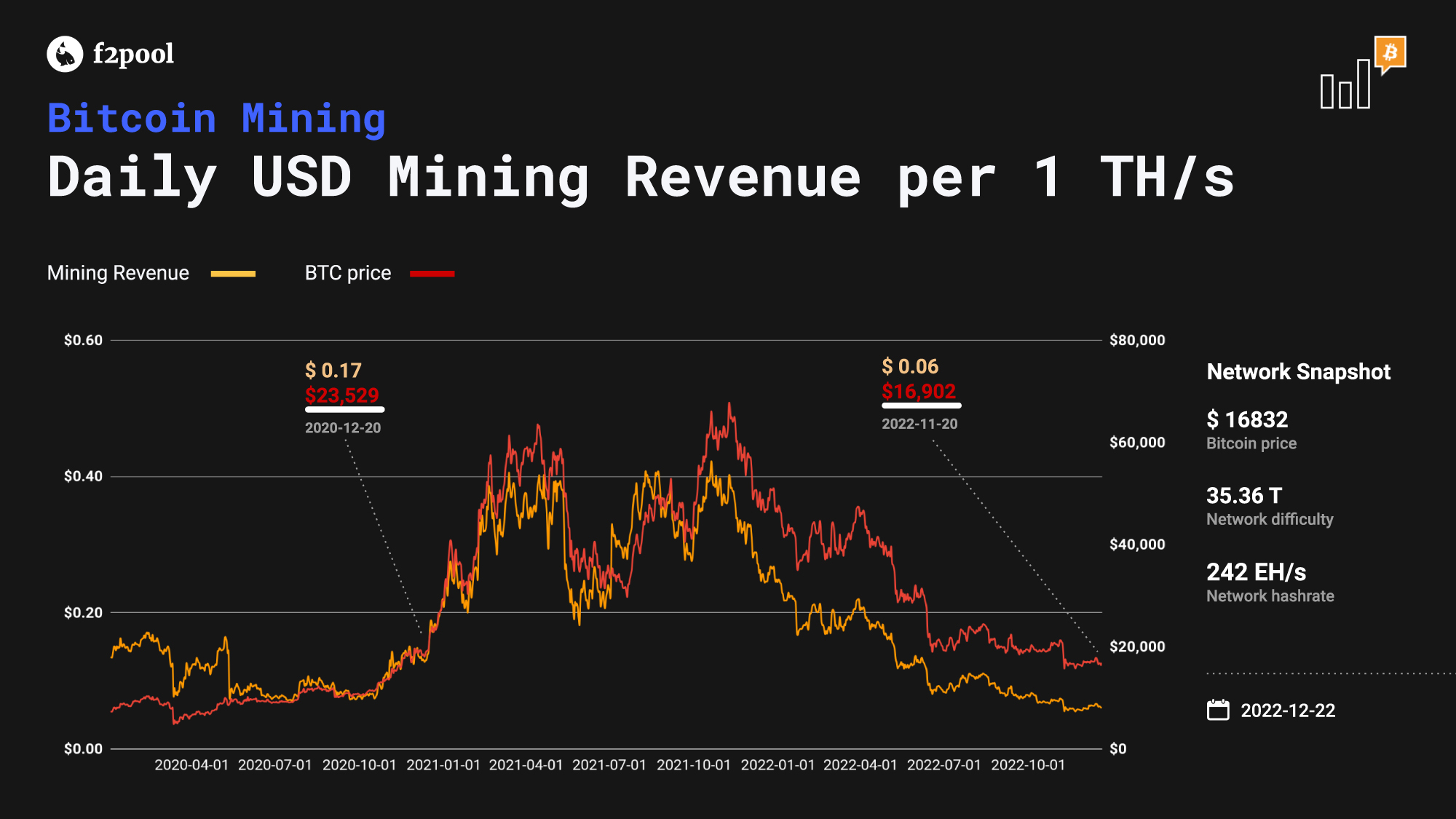 On 2022-12-19, the Bitcoin network saw an increase of +3.27 % in mining difficulty. The current difficulty is 35.36 T. Two weeks ago, a decrease of 7.32% just brought the most significant difficulty drop in the year 2022. With these ups and downs in the mining difficulty and a slight increase in the price, the mining unit revenue maintaining at $0.06 per 1 TH/s, still, becoming a new low record over the past 5 years. 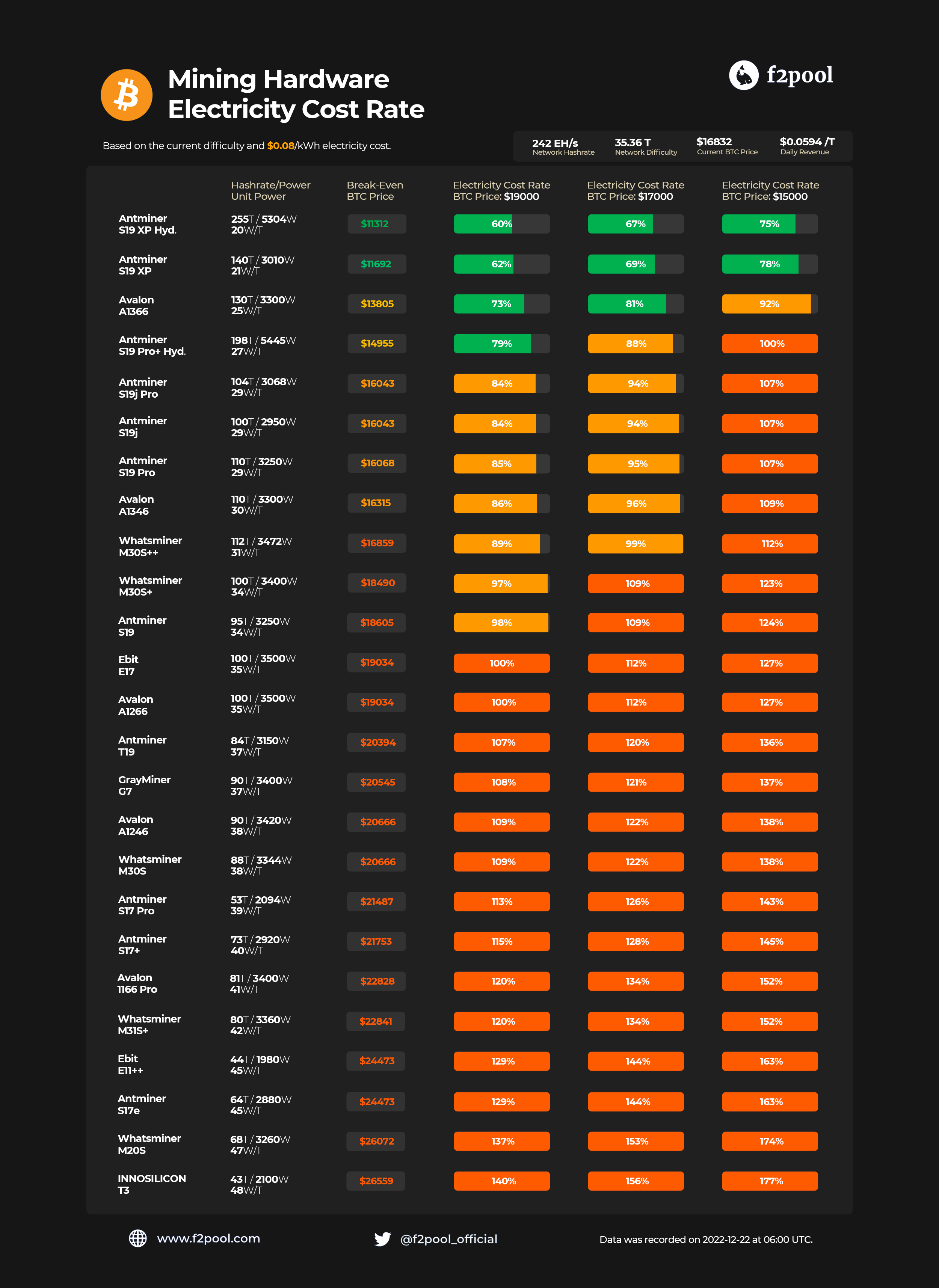 With the electricity price level at 0.08 kWh, the overall status of mining rigs’ cost rates is quite similar to one month ago, less than 10 models can still bring positive profits. Details are shown in the above table.

The GPU minable network Aleo, kicked off its incentivized testnet 3 at the beginning of December. For Proof-of-Work miners, the incentives account for 7.5M credits. The incentive period will last until 2023-01-26 or until all 7.5m credits have been released—whichever comes first. The current incentivized credit has reached 1.21M as of the time of writing. Track the incentives on their block explorer, and know more about how to mine Aleo at f2pool by clicking here.

Today marks a significant milestone for Aleo. We have just turned on incentives for our Testnet 🎉

👇Here is what you need to know & how to start collecting Aleo Credits pic.twitter.com/03Nn4lbb4o

Bitcoin Core 24.0.1 has been released, with code to ensure you are connected to other full RBF (Replace-By-Fee) nodes. Here for the release notes.

We will be counting down with @f2pool_official as we approach Hathor's third and final halving! ✅

Kadena has released Chainweb Node, version 2.17. This release will change the current Pact and Chainweb Node experience for dApp developers and users.

According to a press release, the Hong Kong Stock Exchange has supported trading the CSOP Bitcoin Futures ETF starting 2022-12-16. It is the first of its kind available in Asia.

you can now send US Dollars, which are received as local currency, to any supported phone number or bank account in Nigeria, Ghana and Kenya

the receiver doesn't need a bitcoin wallet, a particular account, or even a smartphone

Decred has released Bison Relay, a peer-to-peer social media. It enables “zero knowledge communications” so that only the intended recipient can see the content. It is with built-in Lightning Network payments, for monetizing the content you desire.

Peer to Peer social media.
No censorship, no surveillance and no advertising.

Handshake has released Excerpt, a new peer-to-peer blogging platform. Writers can host blogs on domains they self-custody. Readers can access and self verify Excerpt blogs access by light client resolver. Such as Fingertip.

Introducing Excerpt — The home for Handshake blogging. A peer-to-peer writing tool from The Shake and @eskimo_dev.

Dogecoin merged mine with Litecoin and is now growing as one of the biggest networks in mining revenues.

Thank you for all the Birthday Wishes! ^_^ pic.twitter.com/LPlJDBagzE

ETC Cooperative has introduced Ethereum Classic Course to the community, it will be including 4 parts with 38 classes from the history, to the mechanism, and further into the outlook of Ethereum Classic.

ETC Cooperative will be providing more opportunities for people to understand and learn about ETC. Therefore, we’re sharing ETC Classes through the community.💚

The State of Sia is back to the Sia community, updating monthly about the development and team of The Sia Foundation.